On a closer observation, it is easy to realize that all animals are interesting in one way or the other. If other animals had the cognitive ability to analyze humans, they will, no doubt, be amazed at many interesting things about us. Sure, our many habits such as smoking, playing soccer, dancing to music and the rest of them will appeal to these animals.

But then, we alone are in the position to observe these creatures, and our focus today is the Binturong.

Background Information About the Binturong

Associated with its looks are long lustrous black hairs that make it easy for it to move around in the dark without being noticed, short legs. There are usually tinges of grey hair on the black hair that makes them have a speckled appearance. The average binturong has a length ranging from two to three feet with the tail measuring about that same length. They weigh between nine to fourteen kilograms (4 -5kg).

The binturongs habitat on its own is interesting unlike some animals which have just one location or a few of them, the binturong has quite a wide range of distribution in nature.

It is native to South Asian countries like India, Nepal, Bangladesh, China, Malaysia, Myanmar, Vietnam, Indonesia and Philippines. It’s largely found in rainforests, high forests and jungles. The binturongs live on trees being arboreal animals. However, it is important to note that they do not jump from trees to trees easily because of their weight. They climb down from one tree before climbing up the next one. They have however being noted as skillful climbers though the go at a slow pace.

Currently, they are classified as vulnerable in terms of conservation because their population has declined by about 35% over the past 40 years with the major threats being destruction of their habitat through uncontrolled deforestation (especially without afforestation) and hunting for their fur and meat.

For an animal that lives in the most tropical of tropical rainforests, one would expect that the binturong will have a lot to choose from. And that would be an accurate thought as this animal’s diet consists of a lot of things.

Binturongs feed largely on meat and fruits. They eat fishes, smaller mammals like rodents, birds, insects and fruits. Due to the fact that they are not predators on the normal, they feed largely on fruits and vegetables. They have figs as a major components of their diet.

Through their diet style, they act as agent of dispersal for fruits'(especially for the fig fruits they enjoy eating- the strangler fig) helping to keep replanting in the rainforest.

Considering the fact that they also eat rodents, we can as well say they help in controlling pest in the rain forest thereby creating their own form of balance in the ecological system. However, when kept in captivity, their diet may include meat mix, mineral supplements, oranges, apples, peaches and even banana.

As long as binturongs are concerned, reproduction is a process that can take place at any time of the year. With an average sexual maturation age of 28 months in male and 30 in male, the binturong has a gestation period of 85-92 days and a heat period of 81 days with fertility lasting till they are 15 years of age.

So we may want to say they are more reproductively actives when they are two and a half years old and ends when they are fifteen years old. Usually, the female binturongs are the dominant sex; bigger and heavier than the male. Binturongs don’t bear too many offsprings at a go. On the average, 1 to 2 babies are birthed at a time, and weight 140-300 grams. On rare occasions, however, occurrences of up to six young ones at a time have been recorded.

Having got an idea of what a binturong looks like, as well as some of its peculiar behaviours. But to appreciate this animal even more, consider the top interesting facts about this amazing animal.

Binturongs Have a Long Lifespan

Did you know that binturongs can live as long as 2 years in captivity? Sure they do. But it doesn’t end there. Reports indicate that they can live even longer in their natural habitat.

The Origin of its Name

When it comes to name, the binturong suffers the same fate as the kangaroo, or even worse. While the kangaroo got its name from the mistake made by European explorers as they tried to interpret aboriginal language, there is no known record of how the binturong got its name. In essence, the real meaning of the name is unknown.

They Are False Omnivores

Here lies the big controversy among biologists and taxonomists. While some would outrightly conclude that the binturong is a carnivore, some others believe it is an omnivore. A handful of them even believe it once was a strict herbivore. Whatever the opinion, the simple point is that the binturong eats flesh and some fruits. But then, it neither eats leaves nor grasses. This makes it carnivore, quite alright, but also makes it an incomplete omnivore.

In humans, just like it is in most animals, implantation is instant and involuntary. As soon as the male gamete fertilizes with the female gamete, they are implanted on a portion of the female’s uterus. For binturongs, it is almost the same, except that they somehow have managed to control the whole process. When conditions are favourable, the implantation happens instantly but in tougher climes, they delay it. This makes them one of the few animals in existence that can decide when to give birth.

They smell like buttered popcorn. But before you think of having a mouthful of those crispy popcorns you eat at the movies, you may want to know that the binturong doesn’t exude this fragrance for fun. They possess scent glands under their tails with which they use in marking out territories and for attracting females for mating. It would seem as though binturongs are smart enough to realize that the female folk like sweet fragrances. Just like high quality perfumes would attract women, the sweet popcorn fragrance also attracts female binturongs. The scent is usually released when the tail is dragged through tree branches. 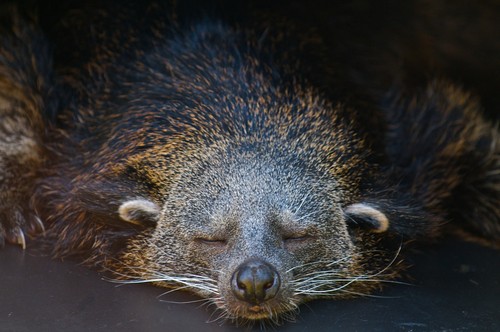 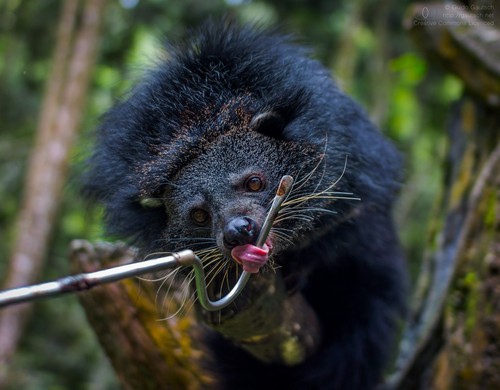 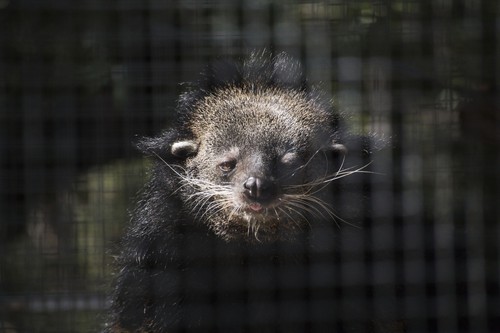 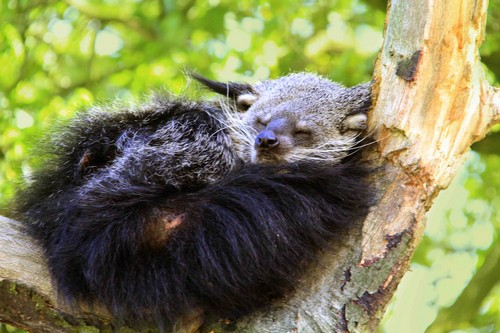 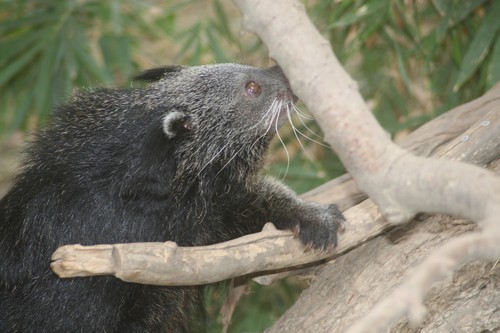 They Use Urine for Self Defense

By the binturong’s standard, an effective self-defense campaign could be as easy as urinating on a threat in addition to snarling and general aggressiveness.

They Seem to “Talk”

Of all creatures that walk the surface of the earth, only humans have the unique privilege of expressing their moods with words and body expression. But watch out dear humans, the binturongs are learning fast. Depending on how they feel, they let out various sounds to show it.

Sexual dimorphism is said to exist when there is difference in the size of a male and female individual of a given specie. When this happens, either of the two gets bigger than the other. In the case of the binturong, the female is the bigger one, and it beats the male by at least 20%. So when you find two binturongs playing on a tree, the larger one is likely to be the female.

They Have a Unique Resting Posture

Binturongs are arboreal mammals, hence spend the bulk of their time on tree branches. When they are neither hunting lower animals for food or stalking a mate, they are usually seen in a quite funny posture. They often on tree branches putting their tails below their heads. 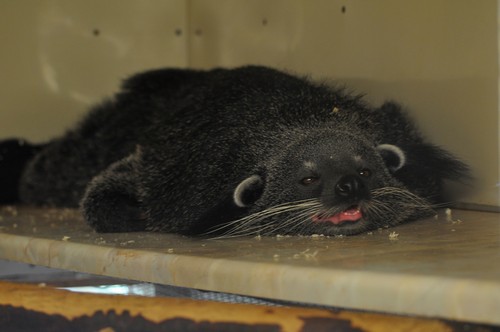 They Are False Diurnal Animals

This while most animals are either nocturnal or diurnal, binturongs seem to be just both. Scientists have classified them as nocturnal organisms, but in the real sense, they are active both day and night. We will however continue to classify them as nocturnal until a better word is coined for this interesting behavior.

Overall, the binturong is an interesting animal no matter how you look at it. It is one of the two surviving mammals with a prehensile tail and is well distributed. Hopefully, it will be around for a long time as it is not under much threat from poachers and natural predators.