At the mention of Emus bird, the indigenous Australian will start salivating. It is one of the most important birds. Nothing goes to waste when it comes to Emus bird.  The meat is consumed as food, the feathers are used for ornaments and the oil has many uses including fuel, medicine and just for being applied on the skin.  Many birds and animals don’t survive well in Australia but this is where this bird does its best.  Am sure after reading on, you will start wondering where you could get its young ones so you can breed some for your own use or for commercial use.

Emus are the second largest birds in the whole world.  The only birds that exceed them in size are the ostrich. Emu’s size ranges from 139 cm to 164 cm in height, this is from the head to the tail. The body weight ranges from 18 kgs to 60 kgs.  The female are normally bigger and heavier than the male.

Emus have two sets of eyelids. One eyelid is used for blinking.  The other eye lid is used to clear the dust.  They have two long and very strong feet. Each foot has three toes. Emus have a long neck.


Emus have very small wings and therefore they do not fly.  These wings are only used to stabilize the whole body.  They are very fast runners and flap the small wings as they run.  They are known to run as fast as 50 km per hour.  Emus make a stride of about 100 cm and these strides can increase to 275 cm when it is walking faster. They have thick cushioned pads under their feet which facilitates them to walk on hard objects without being hurt.  They have sharp claws which they use to attack their enemies and also to defend themselves.

Emus have very small beak as compared to what you would expect such a large bird to have.  The beak measures around 5 cm to 7 cm.  The male Emus grunts’ like a pig, the female makes a loud booming sound. They have excellent eyesight and good hearing ability.  They use these senses to detect danger from far.

Emus have soft feathers.  The neck has scattered soft shaggy feathers revealing a pale blue color of its neck.

Emus are found in Australia.  They are found on the inland and near the coastal area of the said country.  They are also found in the forest and woodland.  They normally travel in pairs of a male and a female.  The only time you will find them in large numbers is when they are sourcing common food together.  Emus can travel for long distance in search of food. They are known to move according to seasons.  For example, they move to the north in summer and to the south in winter.

Emus eat both plants and insects. Their main food is determined by the season.  Acacia, grasses and casuarina are the plants they prefer mostly.  They like eating insects and arthropods.  They also like grasshoppers, crickets, beetles, cockroaches, ladybirds and cotton-boll moth larvae.  All these provide them with protein which is required by its body.  They also feed on wheat and fruits and any other crop which they come across.  They are known to climb high places in search of food.

Emus eat small stones and charcoal which assist in the grinding of the leaves.  These stones can weigh 45 grams each and an Emus can have stones weighing over 700 grams in their gizzards.  Emus like drinking water and if water is available they will drink daily.  They can take as long as ten minutes while drinking water.  They at times go for days without water during the dry season.

During the breeding season Emus stay in pairs of a male and a female.  They move to a breeding place and may stay in this area for close to five months.  They guard this territory from other birds. During this time both the male and female gain a lot of weight. The male experience some hormonal changes. His testicles increase in size.

The male construct a rough nest on the ground using sticks, leaves, bark and grass.  The nest is then placed on an open ground, on a rock or near a shrub.  This is usually an area where it is easy to see approaching predators.

The female courts the male.  Both of them experience color changes in some parts of their body.  The female will go in circles making some sounds in an attempt to draw the attention of the male.  The male will then move closer to the female and the female will squat in acceptance and the two will mate.  This mating may go on for about two to three days.

The female will lay 5 to 15 eggs in the nest prepared by the male.  The eggs are green in color.  The male is the one who incubates the eggs while the female continue to lay eggs.  The incubated eggs turn dark green as days go by.  The male does not eat or drink anything during the incubation period. The incubation period is two months.  The male loses weight during this period because he lives on the dew he can reach from the place he incubates and the stored fat.  The chicks which are hatched are strong enough to leave the nest within a few days.  The male is the one who takes care of the young ones during the early days and months.  He protects them and will not allow anyone, not even the mother, to come near them.  At night he covers them with his feathers to keep them warm.

Like all other animals, Emus have enemies.  The greatest of these enemies are human beings who hunt it for food and other uses. Giant lizards, also known as megalania are known to attack them.  The wedge tailed eagles are also one of their predators. These birds will target the Emus in open ground and keep the Emus running in different areas.  Dingo which is a semi-domesticated wolf is another predator which was introduced to this Emus hunting by people who wanted them hunted down because of destroying their crops. 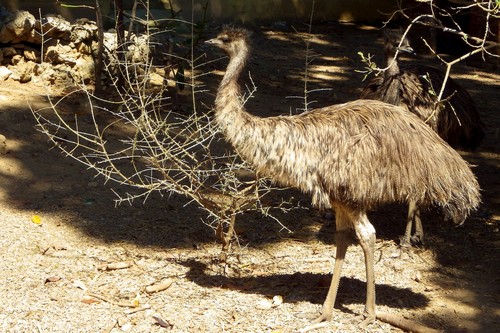 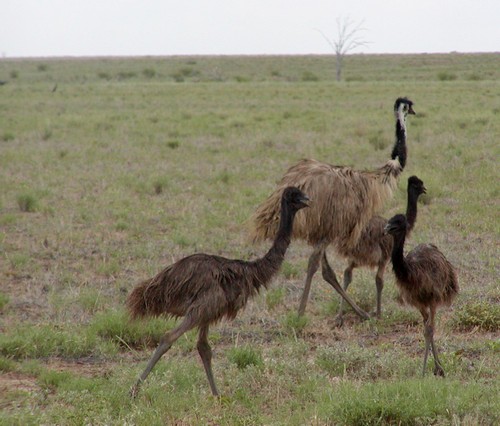 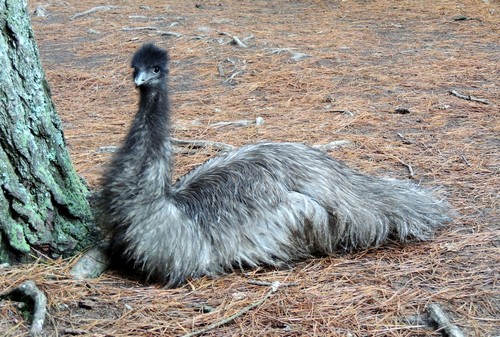 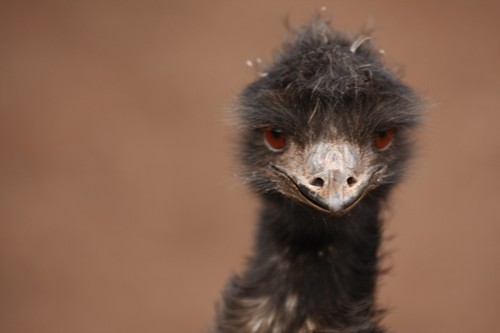 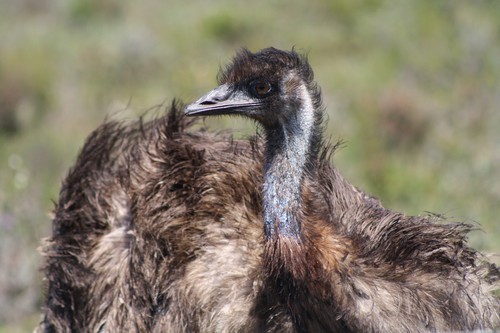 Emus are diurnal birds.  They start sleeping after sun set and sleep during the night.  They squat on their feet and fall into a half asleep state during which they are alert.  They then fall into deep sleep where even their neck falls to the ground.  Emus will wake up a few times in the night and then go back to sleep.

The female Emus produce a blooming sound.  This sound is mostly produced when it is performing the courtship rituals.  It is meant to attract the male as well as to inform the other birds that, that is its territory and they should not come close to it. It also produces this sound during the breeding period.  The male produces a grunt sound like that of a pig. The male Emus produce this sound during the courtship period to scare away other males and also during the incubating period.  Both the male and the female produce these sounds if they encounter some threats.

Emus do pant in hot weathers in order to maintain the body temperatures.  Their lungs act as evaporative coolers. 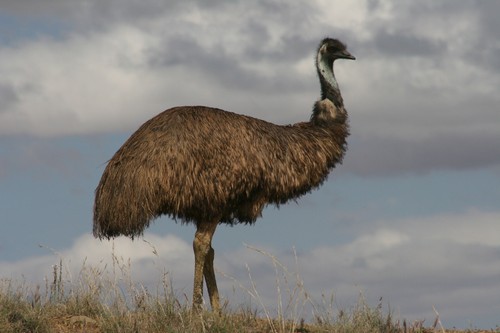 Everything on the world has some importance. Emus are not left behind when it comes to benefits.  They are a source of meat to the community. The meat is a low-fat product.

The clear oil from the Emus consists of fatty acids.  The oil also contains various antioxidants.  The oil also has anti-inflammatory properties in it.  The oil has many health benefits and I believe that the indigenous Australian people who used it before that tests were done benefited from this oil.  It is also said to heal wounds faster than other treatments.

The Emus leather in combination with other leathers is used to make handbags, wallets, shoes and clothes.  The feathers are used in arts and craft for decoration.  The egg shells are also used for decorations on portraits.

During the dry season Emu’s are known to invade the people’s crops and destroy them as they look for food.  The people have been hunting down the Emus by all means in order to protect their crops.  So many emus have been killed in the process and hence, their population has decreased tremendously.

Emus have also been hunted down for meat and other benefits by the people.  So many people have grown to like the meat and have used the oil for medicine and fuel benefits.  Some of them hunt down and sell the meat and oil and get some income and in so doing the population has decreased. 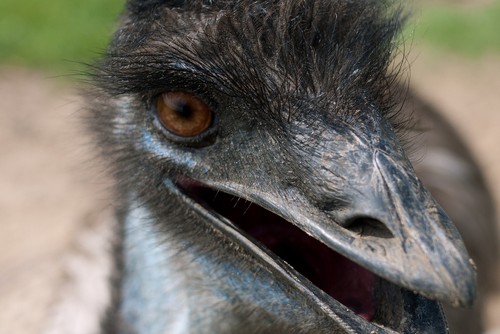 As the population of the human beings increase there is need of more room for expansion and so forests have been cleared, homes and infrastructure built.  In so doing the Emus habitation has been interfered with and some of their eggs destroyed or exposed to their predator.  This has caused the decrease of their population.

The Australian government found out that if nothing was done, the Emus would soon vanish from the wild animals.  Some of these birds were captured and kept in captivity.  Those people who wanted to keep them and do Emus farming as a commercial business were to get written authority from the relevant authority.  Unnecessarily killing of these birds was forbidden and those found in possession of their products had to explain how they got them.