The echidna is a very weird animal, with a lot of unusual characteristics. At first glance, you could easily mistake the echidna for an enormous hedgehog, or an anteater because of its snout, but coincidentally these animals are not even related to the echidna. The closest relative the echidna has is the duck-billed platypus. The spikes on the back of the echidna are just the beginning of this animal’s unusual characteristics, as it is the only mammal, along with the duck-billed platypus, that lays eggs. It was named after the mother of monsters, from Greek mythology.

We will take a look at some of the characteristics that make the echidna one of the weirdest mammals in the world.

The spikes are just modified hair really, just like that of the porcupine. The echidna control the movement and the direction of these spikes using special muscle bundles connected to the base of each spike, which can grow up to 50mm in length. The spikes are used for protection, to help itself stand up after it has fallen or rolled over to its back, or while climbing. However, it cannot eject the spikes from its body while under attack.

The species that live in the colder regions of southern Australia have thicker fur, and the colors vary from light brown to black, depending on the region the echidna is found in. Adult echidna’s can weigh up to 8 pounds.

The snout is seven up to eight centimeters long and is rigid in order to enable the animal to break up termite mounds and fallen branches or trunk trees when searching for food. An echidna’s mouth is on the lower side of the front of the snout. This allows the animal to feed easily, especially when nursing. They don’t possess teeth, but unlike the anteater which swallows its food whole, the echidna first grinds its food on the roof of its mouth before swallowing.

The echidna has short legs, which are well developed for digging and scratching the ground. Five flattened claws can be found on the feet in front, and these are adapted to burrow and dig through fallen branches or trunks of trees and termite mounds, while the back feet are specialized to help push away loose soil while the echidna is burrowing. They also have ear slits on the sides of their head which are mostly unseen, because they are hidden from view by the spikes covering them.

Echidnas are found mostly in open grasslands, forests, woodlands and in hollow logs. They sometimes take over the burrows of other animals, such as wombats and rabbits. They do not thrive under extreme temperatures, and in temperate climates, they will only come out early in the morning or during the late evening. They will retire to caves or crevices during the day to avoid the heat.

Echidnas are known to be good swimmers. They often take to the water to groom themselves, and swim with their snout above the water. They often have large home ranges, and seldom defend territories like other mammals. It is common to see overlapping echidna territories. They are protected species in Australia, though they are rarely seen in the wild, due to their relatively timid and secluded nature.

During extreme weather conditions, such as harsh wind or rains, the echidna often burrow into the soil or under bushes. Both the echidnas and platypuses are known to have the lowest body temperature of any mammal, which could range between 86 to 90 degrees Fahrenheit.

The echidna is one of the last surviving members of the monotremes, one of the sub-divisions of mammals, alongside the marsupials and placental animals. They are one of the only mammals that lay eggs, besides the platypus.

Their breeding season begins at the end of June and lasts till early September. The echidna’s are normally solitary mammals, but however, during the mating season, they come together to form trains of sexually active males, which follow one another to seek after females.

A male echidna could join several separate trains during a single mating season in order to find a female to reproduce with. A female echidna in heat could mate with up to 11 males one after another, and these unusual mammals can also mate underground.

Due to this multiple mating process, the sperms released into the female team up to form sperm bundles, which swim faster than single sperm heads, and this makes the mating process highly efficient. The copulation process can last from 30 minutes up to 2 hours.

Male echidnas possess a four-headed penis, hidden in a shaft covered with spikes, and is about 7 centimeters long when erect. During the process of mating, two heads are used to release the semen into the female’s reproductive organ, while the other two heads do not get erect. Each time the echidna mates, it alternates the heads used in reproduction, and the heads that are shut down. One interesting thing to note is that echidnas do not use the penis to urinate. It is specifically used for mating. Both male and female echidnas have cloacas which they use to urinate.

A female echidna lays just a single egg, and the egg is incubated in its pouch, taking about ten days to hatch. The pouch is not a permanent feature of the echidna, but it develops before mating. The eggs have a soft shell, and are about 13-16mm long (about the same size as a U.S dime or an Australian 5-cent coin) with a slight oval shape.

The young echidnas have well developed forelimbs at hatching. They are very little, born spineless and can weigh as little as 380mg, measuring about 1.45cm. The echidna females, though they produce milk, they do not have nipples. Instead they have an area known as the milk patch, which has special pores that produce milk when stimulated by the young echidnas. The young echidnas can also be known as puggles. They feed from the mother and stay in the pouch for about three months, and by the end of this period their spines will have started to develop. 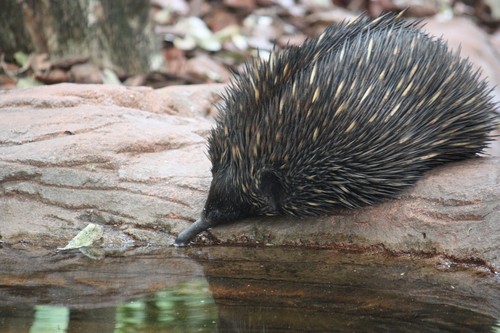 Young echidnas leave the burrow around the age of 12 months, at this point weighing between 1-2kg. Full grown male echidnas weigh up to 6 kg, while the females weigh about 4.5kg. Due to their low metabolism rates and their efficient stress management methods, the echidna’s can live for a long time. There are reports of an echidna in captivity living for up to 50 years, although that life expectancy is much lower while living in the wild.

The echidna’s diet is mainly constituted of termites and ants, although beetles, earthworms and moth larvae are also part of its diet. The short- beaked species’ diet consists majorly of ants and termites, while the other species, the long-beaked echidna, prefers to eat worms and insect larva. They have a high sense of smell, and they use this to locate food sources. Their beak is very sensitive to electrical stimuli, and they track down and catch prey using their long sticky tongues. Because they do not possess teeth, they grind food between their tongue and the lower side of their mouth before swallowing. They feed in the morning and late in the evening, to avoid the hot weather of the afternoon. 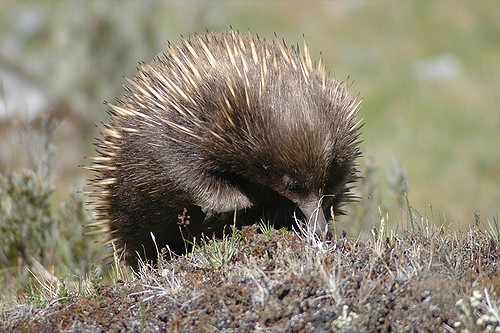 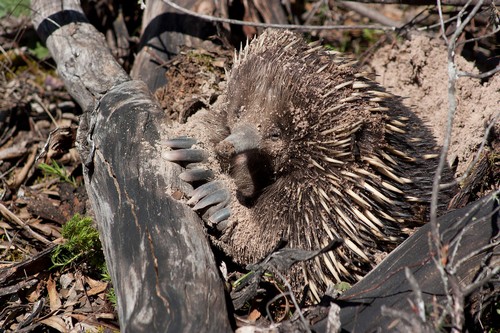 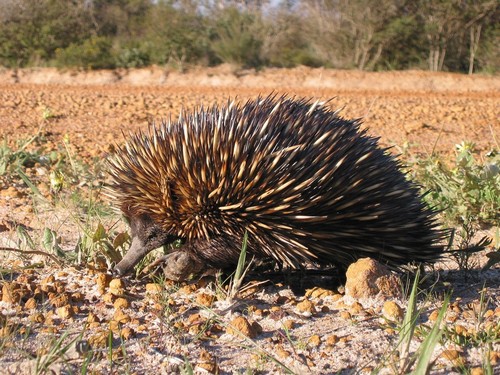 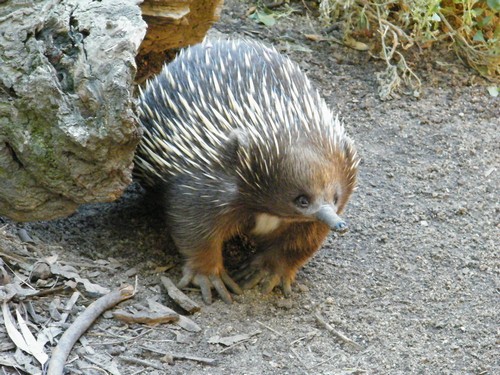 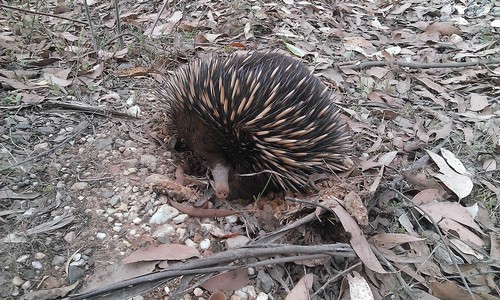 Echidnas are very shy and reserved animals, and do not like to be caught unaware. When they feel threatened, they often curl into balls, with its legs and snout tucked underneath, and will use their prickly spines to protect themselves from predators. They are good diggers and will often burrow straight down into soft soil to escape from predators. Their short strong front feet allow them to keep on digging even while trying to fend off a predator which is attempting to drag them away from a burrow. Even with their specialized spikes used to protect themselves, these shy mammals still face a variety of dangers in the wild. Some of the predators which the echidna has to worry about include feral cats, foxes, goannas and domestic dogs. Snakes also pose a huge threat to the protected species, as they will find their ways into the burrows of echidnas and prey on the young defenseless puggles. The echidna possesses a hollow spur on one of its back feet, and it is still uncertain what this spur is used for, as it is not used to inject poison into predators. Echidna’s prefer to be undisturbed, and even merely picking them up for a closer look may cause them stress. Also, picking them up incorrectly or from a wrong angle can lead to injury. 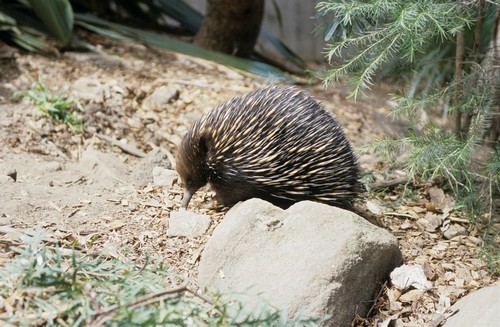 Loss of their natural habitat due to human forces is also a threat to the survival of echidnas. Destruction of understories, which provides cover for echidnas, can expose them to be more easily attacked by predators.