Dogo Argentino can be described as a breed which was developed out of necessity.  In the early 19th century, there was a wild animal known as a boar which was a great threat to the agricultural plantations.  Boars would destroy crops worth millions of dollar each year.  Boar is a large and strong animal.  Human beings would take so long to hunt and kill just one boar.  This boar was also a threat to the lives of human beings.   Because of the availability of food, boars multiplied very quickly.  Their reproduction rate was alarming and human beings could not help wondering what they would do to curb this problem.

A medical doctor known as Antonio Nores decided to breed a big hunting dog.  He interbred many different breeds of wild dog and came up with one which was capable of hunting and killing the boar and other big wild game.  His other main aim was to come up with a dog which would friendly to human beings and give them protection.  He called this big hunting dog, Dogo Argentino.

Dogo Argentino is a large muscular strong dog with a striking white color.  It originated in Argentina reason why it bears the name argentino.     It is said that the dogo was developed to fight wild boar which was reproducing at a very high rate and was a threat to human life and the crops.  The main reason why people keep this breed is for hunting big-game and for offering protection to the owner and his household  and also as family companion.

So many wild dogs were interbred to come up finally with dogo argentino.  The female Dogo Argentino is slightly smaller as compared to the male.  A mature female dogo has a standard height of between 60 cm and 65 cm.  The male has a height ranging between 60 and 68 cm. Dogo Argentino is a strong dog weighing between 40 kg and 45 kg.  Its length is slightly longer than the height.  The head has a broad skull.  Its physical appearance will tell you it is a real athlete.  It walks firmly and quietly expressing a quick to act response and intelligence.  It has a very strong sense of smell and sight.   It has a dense white coat with a smooth fur.

Dogo argentines are very muscular and have a strong neck.  The body is generally deep and broad.  It has heavy bones and the head is massive.  When dogo smells a prey or a predator the ears stand erect and the eyes look straight towards where the smell is coming from.

Dogo Argentino is a very bold dog with strong instincts.  It runs at a very high speed in a short distance which makes it out run a prey.  It can smell a prey, miles away and with its strong sight run towards it and within no time capture and overpower it.  It is said that dogo argentinos would run capture the boar and overpower it.  It would pin it down and would honor the argentine tradition by not killing it and it would wait for human to come and cut it with a knife.  Then the boar would be taken home and become food for the day.  Dogo argentino has a very strong jaw.  It has strong sharp canine teeth capable of tearing fresh and even a hard skin.  Dogo is conscious of its power and moves around with a lot of confidence.  It therefore creates an atmosphere of being relied on for protection and attacking predators.

When at home with children and other people dogo is loving and protective.  It attacks intruders at the slightest chance in an effort to protect the people around.  Dogo are super active and will not be happy to just lie around all day.  It is important to keep it busy maybe running around with it, taking it out for a walk or taking it out to hunt.  It is not only cruel to chain dogo but it also makes it angry and aggressive and may attack the owner or members of the family.

It is important to take care of dogo argentine by brushing it at least once a week in order to remove loose and dead hair.  It is also necessary that you bath it at least twice a week.  This is because dogo are known to love lying on couches and on one’s lap and on the owner’s feet.  If they are not washed often they will put dirt on the couch and on people’s clothes.  However a mild shampoo should be used.

If you ever want to buy a dogo puppy it is advisable to buy from a professional breeder.   Visit the breeder and you will tell if it is one who is in serious business of breeding or not.  You will tell from the environment the puppies are living, the tidiness and the care she is giving them.  Puppies weigh about 20 pounds and the weight increase very fast depending on the kind of food one is feeding them.

The puppy breeder will ask you some questions so that he can select for you the puppy which will suit your home.  Some dogo puppies are trained to live with cats and other dogs while others are not trained.

As soon as you buy a puppy begin training it when it is of a manageable size.  Like any other puppy, dogo argentino puppies especially when they start teething like chewing and can be destructive if it is left to walk around the house alone.  These puppies are very active and will require someone dedicated to play and run around with.  Dogo Argentino puppies are very intelligent and learn instructions very fast.

You should apply respect, love and consistency if you want your dogo puppy to learn fast.  Harshness may trigger aggression and dogo argentino can be stubborn if not well handled.   All they need is to have one constant trainer to avoid confusion.  Identify a veterinarian who will be seeing your puppy occasionally and ascertaining that it is growing as required.  It is very essential to socialize your puppy as early as possible so that it can familiarize with the environment and also learn to distinguish between the  prey/predators and the family members.  Take it to puppy kindergarten and it will get more training and socialize with other puppies.  It will also learn more on the way to and from the environment.  Allow the  puppy to freely walk around the home and spend time with the family members so that it can familiarize with each one of them.

If you want to buy a dogo argentino puppy from a quality breeder you must be prepared to part with quite a substantial amount of money.   The price is determined by the kind of food the breeder has been feeding the puppy from the time they were born. 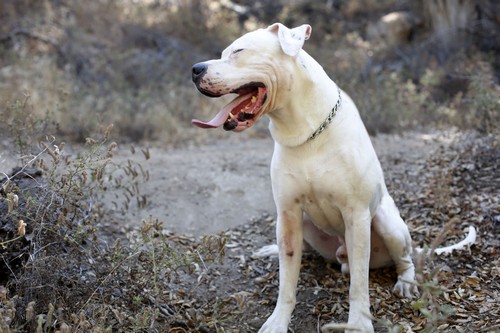 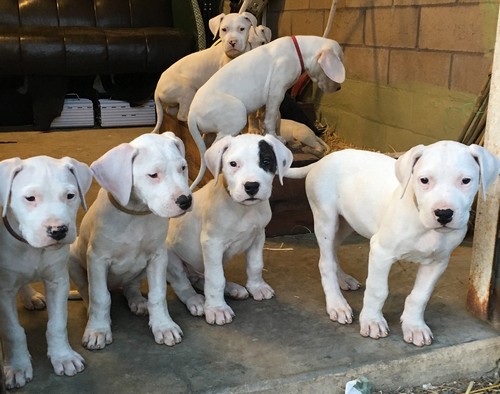 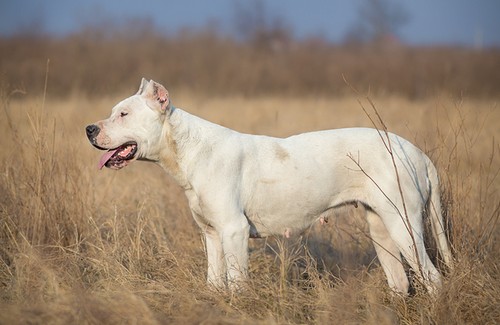 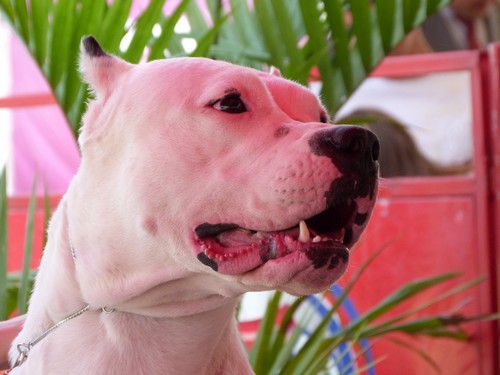 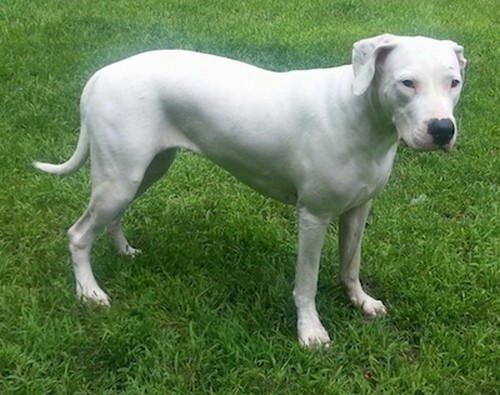 It is very important to buy your puppy from a responsible, reputable and quality breeder if you want a dogo argentino breed that will not disappoint you.  There are other not reputable breeders but they have good breeds.  The price of a puppy ranges from  $1,000 to  $4,000.

Dogo argentino is outgoing, loving and kind towards the owner and members of the family.  It is very friendly towards family with whom they live and you will see it often playing with children.  It is however very aggressive towards strangers and the prey including the predators. With its strong instinct which are extremely strong and a determination which is incredible, it attacks and overpowers much bigger wild animals like the wild boar and the lions.  This intelligent animal is able to use its instinctive ability to distinguish between who to be aggressive towards and who to be friendly to.  It is however advisable that, children should never be left alone to play with Dogo argentino.  This is because when mishandled dogo can try to defend itself by being aggressive towards children.  Dogo is very sensitive and will never tolerate any forceful and unfriendly training.   Dogo is loving and friendly towards members of the family with whom they live, obedient and communicative. 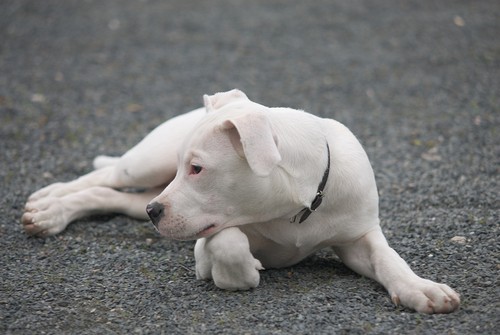 Dogo argentino is a very important animal up until today.  The boar may not be a threat today because probably most of them were hunted down and killed and the ones which remained may have been captured and taken to captivity.  But dogo’s importance increases by the day.  This is because insecurity is worldwide problem.  This problem of insecurity is the reason why this dogo argentino puppy is so expensive.  The demand of dogo is more than the supply from the dogo breeders.  With dogo in the homestead one is assured of enough security.  More than alerting you that there is an intruder, dogo will aggressively attack them.  Dogo’s  jaw is very strong and their teeth are very sharp.  No thieve in his right senses will dare break a homestead guarded by Dogo argentino.   With a smooth white coat, this quiet, loving, intelligent animal makes a home look very beautiful. 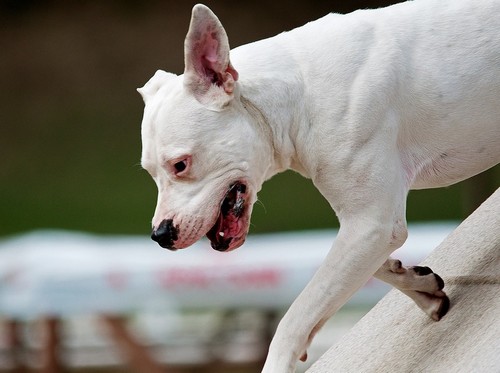