This animal also referred to as the Asiatic wild dog or the Indian wild dog and is known scientifically as the Cuon alpinus. These social dogs can be found in eastern and central Asia and can be found in areas such as Bangladesh, Malaysia, Bhutan, Thailand, Cambodia, Indonesia, Vietnam and India.

Dholes live in clans that are large in size and the hierarchy structure of each clan may keep on changing depending on dominance. A clan will also have several females most of whom are sexually mature and are breeding. Its main competitors when it comes to food are the leopards and tigers, and even though they will all target different prey in terms of preference, there are times when their targets overlap and they end up targeting the same species.

Dholes are capable of jumping high up, as high as 7 feet up and they can swim as well. Dhole populations have been reduced greatly and currently they are considered as an endangered species. Dholes will live for up to 10 years in the wild and up to 17 years when in captivity.

Characteristics of the Dhole

The dhole has the physical characteristics of the red fox and the grey wolf; however it also has some catlike characteristics such as the long backbone and its lean limbs all of which enable to jump high. The dhole has a big skull, which has developed masseter muscles and this makes it to have a face that is almost similar to that of a hyena in terms of appearance.

Another unique characteristic of the dhole is its teeth. It has six molars in the lower jaw rather than the expected seven and the molars on the upper jaw are weak. Furthermore, the molars have only one cusp instead of two and in terms of size, they are about the size of the molars found in wolves. Having one cusp is seen as an adaptation to enable the dhole to be more efficient in cutting meat and other food using the molars.

The average adult dhole will weigh up to around 18 kilograms, although males are heavier than females, therefore an adult female will weigh around 12 to 14 kilograms. They can be up to 60 centimeters tall at the shoulder and have a body that can be as long as 1 meter.

It has rounded ears, which are similar in shape to the ears of the African wild dog. Their coat is made of fur that is reddish in color, though the color will vary depending on the environment and the weather season so as to provide maximum cover. During the winter period, the back becomes more of rusty-red in color and the shoulders, the head and the neck become brownish. The forehead and the muzzle of the dhole are greyish-red in color while the tail is reddish. The tail is fluffy and has a dark brown tip. During the summer period, the coat is usually shorter and darker as well as coarser compared to during the winter period. Dholes undergo molting, as observed at the Moscow Zoo.

Habitat of the Dhole

According to the various sightings of the dhole that have been made in the wild, and data from various national parks where the dhole is present, it seems that dholes will prefer to inhabit areas that are either mountainous, have forests or both.  They further like high altitude areas and they are spotted in areas that are high above sea level.

Dholes are found in Russia, in areas such as Primorsky Krai as well as Pikthsa-Tigroy protected forest. In other regions within Asia, they have been spotted in Taxkorgan Reserve in the Pamir Mountains, which is a region on the border between four countries, China, Tajikistan, Afghanistan and Pakistan and it is therefore possible that the dhole may inhabit the majority of these four countries if not all.

There have been recent reports of dholes being spotted in the Altun Mountains, which are found in the southern part of Xinjiang Autonomous Region that is near Tibet. There are dholes found in Gansu Province though they occur in small numbers and some were sighted in Qilian Mountains. They were also spotted in Yanchiwan National Nature Reserve in Gansu Province, being found at altitudes above 2500 meters above sea level.

There are some small populations of dholes that may be found in North Korea as well as Tibet, while in India, they can be found in the region that is south of the Ganges, in the central highlands of India, as well as the Eastern and Western Ghats found in the southern states.

There are some small populations of dholes that can be found in Bangladesh, especially towards the northeastern sides and some parts of the southeastern parts. They can be found in forest reserves that are found in Sylhet region and the Chittagong Hills. The reduction in their population size is seen as a result of lacking prey in these regions.

There are other populations of the dhole that can be found in regions such as Trabzon in Turkey, the Malaysian Peninsula, Vietnam and Thailand. IN Sumatra, they have been spotted in Kerinci Seblat National Park.

Behavior of the Dhole

Dholes’ behavior is that they are social animals, showing more social interaction as compared to the grey wolves. They do have a hierarchy system that is based on dominance, but they do not have a strict dominance as compared to other animals. They have a social structure that is almost similar to that of the African wild dogs.

Dholes live in clans as compared to living in packs, and they break into smaller groups that have around 5 animals, especially during the spring season and this is because during this period, smaller numbers are more efficient for hunting. To know the dominant member of a clan of dholes would not be easy because they do not show any displays to show dominance, but rather, it is the other members of the clan that act in a submissive manner towards to.

Reproduction of the Dhole

In captivity, the reproduction or mating season for the dhole is around February, however in the wild, the mating period starts from October to January. A clan will have several breeding females, unlike in wolves where there is only one breeding female in a pack. Dholes will live in dens and one den may have more than one female that has a litter of pups.

Upon successful mating, the female dhole will be pregnant for a period of up to 65 days and when it gives birth, it will give birth to a litter of around 4 to 6 puppies on average. The puppies born will suckle their mother for nutrition, for 58 days and during this time, the rest of the clan will feed the mother dhole while she is still in the den.

During hunting, when the rest of the clan has gone to hunt, one of the adult dholes or a juvenile will stay behind with the puppies so as to protect them and take care of them.

To wean the pups, adult dholes will regurgitate food and give it to the pups to try and chew and swallow. Once the pups are old enough, they can join hunting parties and go hunting with the rest of the clan; usually this is when the pups are about 6 months old, when they are strong enough to even assist in killing the prey. 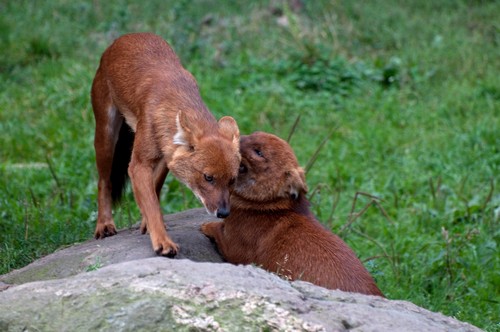 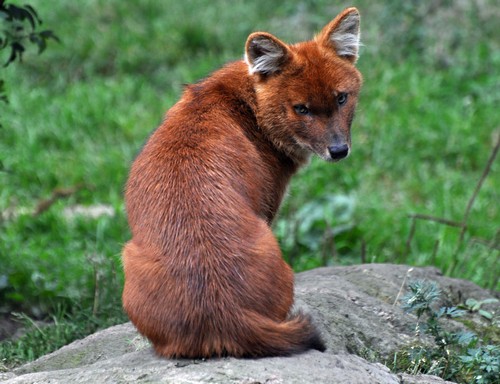 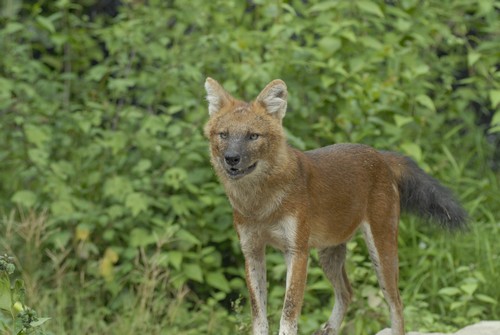 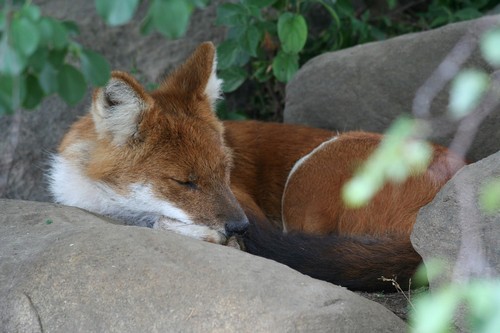 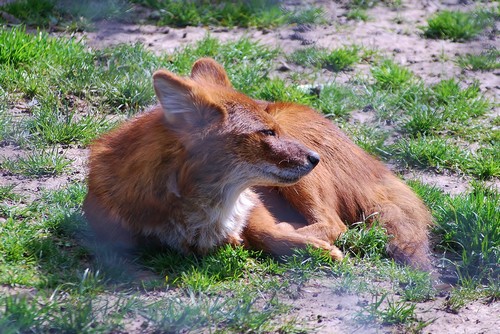 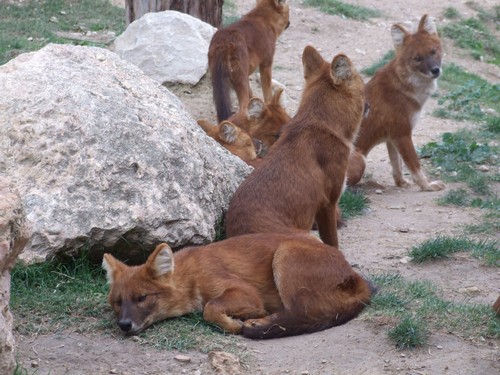 Diet of the Dhole

Dholes are carnivorous animals and they like to hunt during the early hours of the morning, however, they will hunt at night when the moon is out and it is bright enough to provide adequate light for hunting activities which shows that for successful hunting, dholes greatly rely on their eyesight.

Dholes are not as fast as the fox or the jackal but they have the ability to run for long periods of time and therefore they can comfortably follow prey as it runs. Several dholes will chase prey, taking over the lead in turns and the rest of the clan will stay behind, following at a steady pace. However, most chases are short and will go for only about 500 meters. Dholes will occasionally take advantage of water bodies, and they will drive their prey there so as to limit their movement and their ability to escape.

Dholes will kill their prey by grabbing the nose. One will grab the nose of the prey while the rest of the clan will pull the animal down by biting it on the hind limbs and the flanks. At times, they will blind their prey so as to be able to kill them quickly and prevent the prey from escaping. 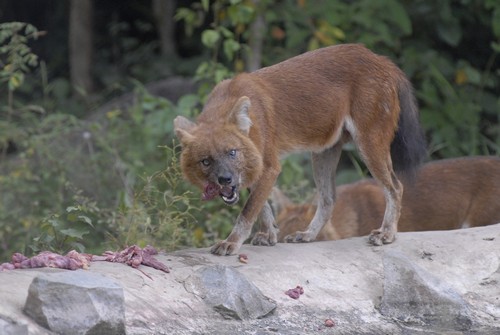 They will blind their prey by attacking the eyes of the prey. They will easily kill prey that weighs 50 kilograms, and then they will each tear off chunks of flesh and go eat in seclusion. However, dholes will allow the puppies to eat first when they have made a kill.