Armored with tough, scaly skin, crocodiles can be defined as enormous aquatic reptiles that  can be found in most freshwater bodies in Asia, Africa and Australia, although there are crocodiles that can be found in salt water. One thing that is usually very confusing to most people, is the resemblance between crocodiles, alligators and Gharials.  The gharial has a narrow snout and are easy to tell apart. 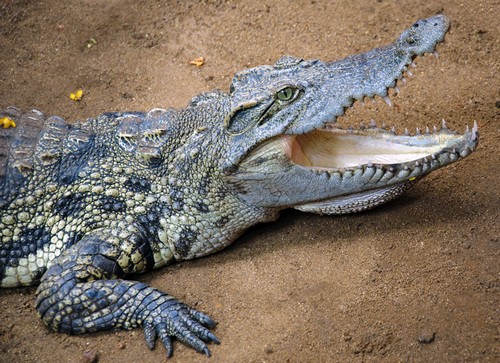 Alligators and crocodiles are a little harder to distinguish. For one, crocodiles have heads that are longer and narrower than the head of the alligators. They also have snouts that are either U-shaped or V-shaped. The upper and lower jaws of crocodiles are of the same width. When the mouth is closed, the teeth in the lower jaw are outside the upper jaw. Unlike with alligators, when the mouth is closed, crocodile teeth are visible while Alligators have depressions on the upper jaw allowing all its teeth to fit in its mouth when closed. The toes of crocodile have more webbing of the hind feet. Crocodiles are also able to survive salt water because they have specialization glands. Although alligators also have these specialization glands, they do not function at all.

Another way to distinguish crocodiles from other reptiles that look almost similar is the fact that crocodiles are much more aggressive in nature. Unlike alligators, all crocodiles are tropical reptiles. They are extremely cold sensitive.

The physical characteristics of crocodiles allow them to thrive in its environment and make it the perfect predator.  Its body is streamlined which makes it a great swimmer because it is able to reduce water resistance. When swimming, a crocodile will take its feet to its side to further reduce water resistance.  Their webbed feet come In handy to help them when in shallow waters. Instead of swimming, they can walk comfortably in water. These feet allow them to make fast turns and even initiate swimming in the water. The crocodile has a rigid tissue at the back of the mouth known as the palatal flap that prevents water from entering its mouth. If you were ever wondering if you can drown a crocodile, well you cannot. The tissue has a special path from the nostrils to the glottis. When submerged, the crocodile’s nostrils are closed. 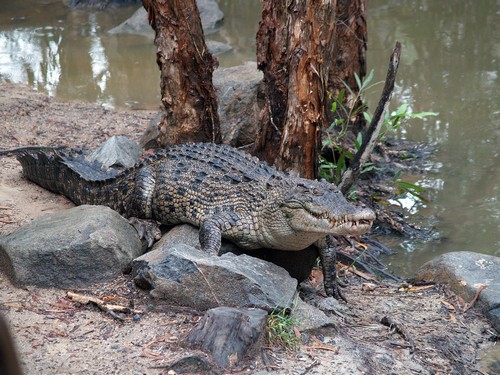 Funny fact about the physical appearance of the crocodile is that it cannot stick out its tongue. The tongue of a crocodile is held in place by a membrane that restricts its movement. Most of the body is covered by a thick rugged and scaly skin that provides protection to the crocodile against attacks from other crocodiles or other animals and objects in the water. The belly and sides of a crocodile however have very smooth skill. On their armored skin, there are small capillaries that allow it to absorb heat. Crocodiles also have pore on their upper and lower jaws that function as sensory organs and also have a secretion function. Occasionally these pores produce an oily substance that flushed mud off.

The size of the crocodile varies significantly depending on where they are found. For instance, the dwarf crocodile only grown to the size of between 1.5 meters and 1.9 meters while The saltwater crocodile on the other hand can achieve the size of 7 meters and weighs approximately 1000 kg. there is a great difference in the growth pattern between males and females. With crocodiles, males grow faster and become bigger than females crocodiles. The saltwater crocodiles found in Northern Australia and South-east Asia is the largest known crocodile species in the world. 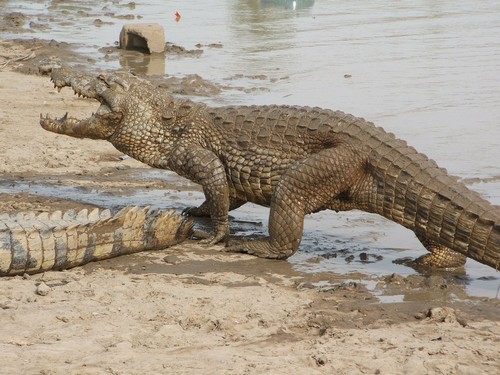 Although they end up big and mighty as adults, crocodiles are the perfect example that a small beginning doesn’t warrant the ending. They begin their life at a 20cm long.

The crocodile can live anywhere between 35 and 75 years. Crocodiles are known to be polyphyodont meaning that they can constantly replace each of their 80 teeth. Next to each fully grown tooth, there is a small tooth that will be a replacement when that tooth falls out. The replacement of teeth for the crocodile will happen as many times as need to ensure that the crocodile can continue eating and thriving in its environment.

The crocodile’s senses are multiplied. This is due to its evolution that allows it to live in its environment today.  Because its nostrils, eyes and ears are on top of its head, it can lay in water, completely submerged waiting for its prey. Crocodiles have perfect vision, both during the day and at night. They have vertical slit pupils like canines do which allows them to see at night almost perfectly. They take advantage of this fact to hunt prey that does not see well during the night. The eye of the crocodile is heavily protected not just by the upper and lower eyelids but also by a membrane that is drawn naturally over the eye when the eyelids are open. This membrane allows the eye to be protected under water while at the same time allows a certain degree of vision to be maintained. 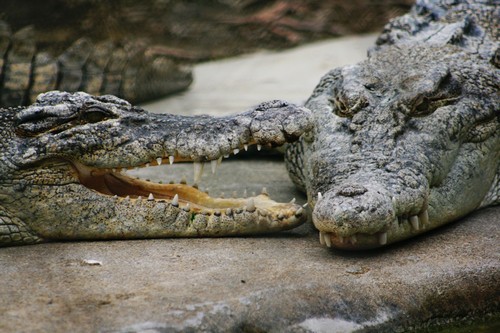 Crocodiles also have a very high sense of smell. A crocodile that detect its prey or carcasses from miles away. They are great hunters both in water and on land. Although it is not clear how the crocodile uses its sense of smell given that its nostrils are usually closed when it is under water, it is clear that it somehow detects its prey when in water.

The hearing senses of a crocodile are also heightened and adapted to its environment. Its ears are protected by flat flaps. The flaps can be moved by its muscles when it needs to listen for its prey’s movement.

The crocodile also has a sense of touch. Its upper and lower jaws have sensory pores. You can clearly see them as tiny black specks on the skin. These specks have nerve endings at the bottom. These help the crocodile respond to any movement in the water. They allow the crocodile to recognize pressure changes and tiny vibrations in the water. This sensory organs allow the crocodile to detect danger, prey and intruders even in total darkness. It also has these pressure receptors on every part of its body. These receptors are however closed  when it is swimming in saltwater. 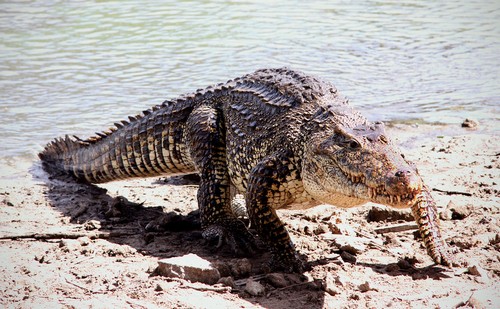 One thing that crocodiles take advantage of while they are hunting is the element of surprise. they are known as ambush predators for a reason.  They stay submerged in water and wait for prey to come close then they then rush out, attack and drown their prey. The diet of a crocodile entails birds, reptiles, amphibians, fish and mammals. Occasionally, they also eat smaller crocodiles.

Their cold blooded nature makes their metabolism very slow. As a result, crocodiles can survive for extended periods of time without eating any food. Although they are thought to be slow, they are not. In fact some crocodile species are known to attack and kill other predators in the water to reduce competition for food. Such predators include sharks and other big cats. When given the chance, a crocodile can also prey of young or dying hippos and elephants. They are also scavengers and will steal and eat food from other predators. Based on the finding of seeds from their stool, it is also speculated that crocodiles also enjoy eating certain fruits. 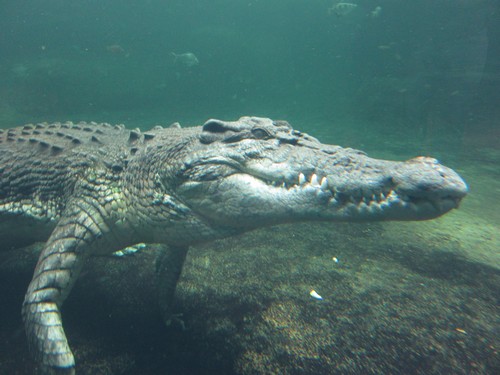 Of all vertebrates, crocodiles have the most acidic stomach. This means that they are able to digest bones and horns from the animals their kill. They are also known of swallowing stones that act as ballast and assist in the crushing of food.

The bite of a crocodile is fatal to its prey. It has large sharp teeth capable of grasping and holding on to its preys flesh and drowning it. It has powerful muscles that hold the jaw shut. Its teeth are not suited to tear flesh from its prey like the lion does. As such, once it has held on to its prey, it is sure that they prey will not run from its grip. The Nile crocodile has a bit force of 22000 N compared to 3000N from the great white shark. Prey can get away only if the bite force was too powerful it cut through the skin. It is however highly unlikely that the animal will survive after being bitten with such force. The jaw muscle of the bone is so large it can be seen as bulges on its jaw. This muscle is so powerful it feels like a bone when touched. However, although the muscle is powerful when it comes to closing the jaw, it is not as powerful when opening it. As such, crocodiles can be subdues easily by clamping their jaws. 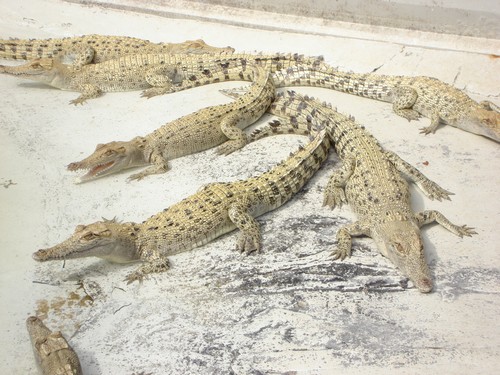