Well, if you hear the word Cockatoo, you might be probably sketching some sort of cock or hen in your mind. You are however, somewhat correct. Though structurally, it is analogous to a cock, these are actually very close relatives to the Parrot, the only difference being its crest and color. These cockatoos are very lovable birds and that is the reason for them being called the “love sponges” of  parrots. Apart from being very lovable, these cockatoos are very demanding and require constant attention from their owners.

So come and get to know these mischievous yet, graceful birds from a very deep point of view!!! 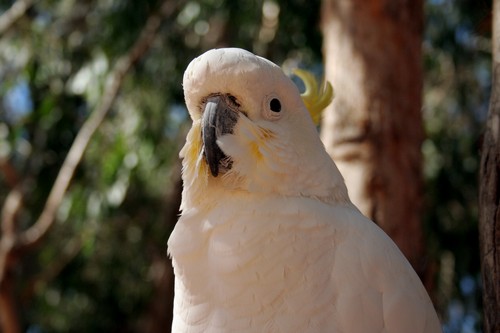 HABITAT AND DIET OF Cockatoo

The cockatoos are generally found in Australia, some parts of Indonesia, Solomon Islands and also New Guinea. Some rare species of these cockatoos have also been spotted in some dense rain forests in the Philippines. Here, their main habitat includes the rain forests, mangroves, some parts of the eucalyptus groves as well as open-country, farming fields.

The cockatoos tend to get together in large numbers, forming a noisy and loud group, which may sometimes include three to four different species of these cockatoos.

They mostly prefer to eat berries, grass seeds, roots of the trees and occasionally, nuts.

The flocks of these cockatoos can range from merely a dozen to a whopping thousand such cockatoos. In some areas in Australia, these cockatoos have been considered as a pest by the farmers working in the fields with grown crops because these cockatoos have a very disturbing tendency to eat the grass seeds and cultivated plantations and destroy the entire crop field. 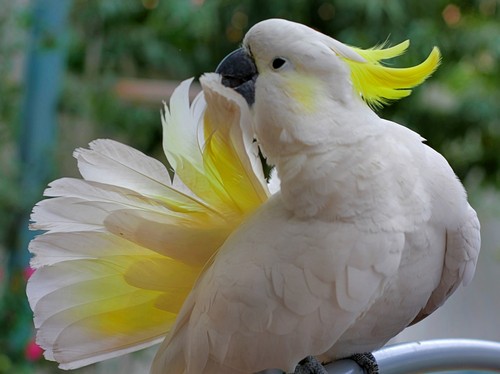 Courtesy of their well known perky crest along with the ever present curiosity, these cockatoos are the most beautiful, elegant, intelligent as well as, most loved members of the most acclaimed parrot family. These cockatoos are generally seen dwelling in Australia and the nearby areas. These are also located in the much smaller island nations to the northern and western coastal sides of Australia. They are mainly residing in the dense forested areas, including the rainforests, eucalyptus groves and pine forests.

Apart from these forested areas, they have also been located around the lower mountainous slopes, open country fields, farming lands, mangroves and also in the areas where they can easily get the grass seeds to feed themselves.

These cockatoos differ from other parrots on many grounds. But the most substantial difference between a cockatoo and a parrot is that the cockatoo can raise its crest whenever it requires, which is not the same with a parrot. Apart from the crest, the main ground for the differences is their bodily color; the cockatoo being mostly black and white, whereas it is not the same with the parrots, which are mostly greenish. 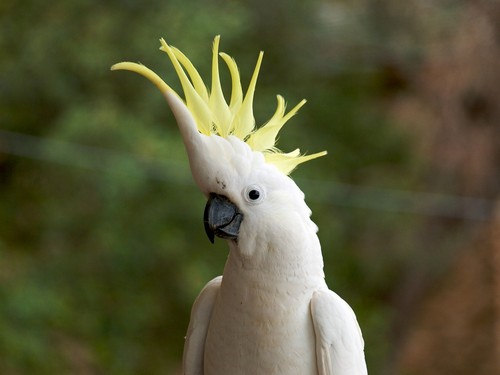 This phenomena can be well explained with the help of a bit of science; the reason being the lack of a special pigment, the Dyck pigment which is not present in the feathers of the cockatoos, due to which they do not have some other colors. On the other hand, the parrots have this pigment in ample quantity, and due to this they can exhibit the color as we see it.

Contrary to the parrots, the cockatoos do not possess any type of oily glands. They, however, tend to produce a fine powdery material which is the final result of a special breakdown of these feathers of the cockatoo. This fine powder helps the cockatoos to protect and preserve their feathers and also keep them neat and clean.

LOVE FOR ONE ANOTHER

A very interesting and appreciable fact regarding these cockatoos is that they possess a very deep affection and love for one another. These cockatoos are never found dwelling alone, not even in captivity.

Whenever someone intends to keep the cockatoo as a pet, they are being instructed to get them in pairs. Each and every species of these cockatoos are found to be living together in pairs or else in groups of numerous members.

This behavior of the cockatoos has a very deeper reason rather than just affection. These cockatoos prefer living in collective groups due to the fact that living with a group increases the chances for these cockatoos to find food and shelter very quickly. 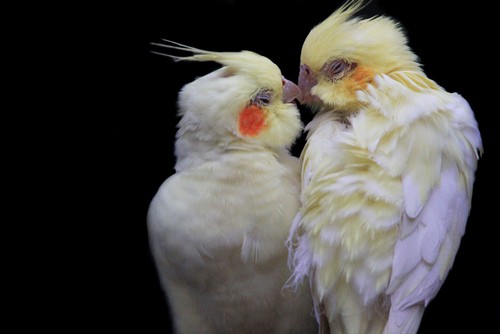 Apart from food and shelter, it also helps the cockatoos detect the predators and attackers very quickly and puts them at an advantage compared to their ambushers.

SOCIAL IN THEIR OUTLOOK

There is a lot of social and physical contact among the members of a particular cockatoo group. They are really social in their outlook and know that to maintain harmony and peace in the group, it is very important for each individual to contribute to their social aspect and interact with most of the members. 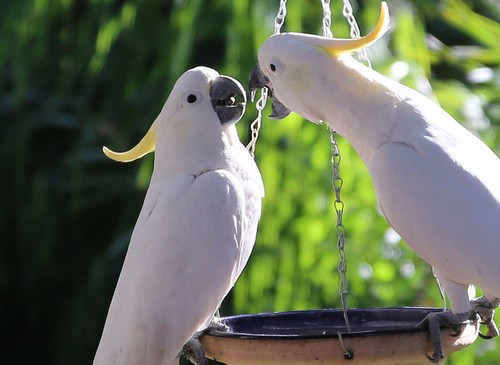 It has also been seen that the elegant and poise looks of these cockatoos are indeed a work of their own fellow group mates. It is because when these cockatoos are resting or lying idly, they tend to groom the other cockatoos, either by gently feeling, caressing and cleaning the wings and feathers of their fellow partner.

This activity of the cockatoos is the sole reason for the kind of harmony and social bonding which these cockatoos represent and is also a reason why these pretty, little birds have such mesmerizing well maintained feathers.

They are so dependent and confident on their fellow cockatoo that even they are unable to groom themselves and their lovely feathers without the help of their mate. It has also been seen that such caring tendency is mostly found among the cockatoos which form a pair of a particular group and such bonding is found to have lasted for long and extended periods of time.

Cockatoos are very romantic when it comes to sticking together with their life partner for the rest of their life. They tend to choose a partner and stick with them for life. It has been seen that as long as both of these mates are alive, they tend to live together. These two partners share such a strong bond and goodwill for one another that it is often seen that even if one of the partner dies, the other continues to stay alone forever till the end of his life.

The young and adolescent cockatoos tend to find its special friend within their group and bonding them starts to grow and prosper. It has been seen that a cockatoo firstly gets to know their group mates and tends to spend most of their time with its friends. 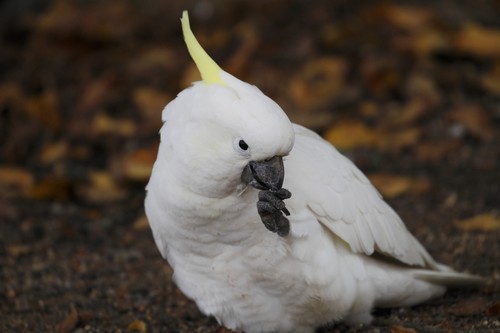 As it grows into an adult, this relationship and bond gets deeper and stronger. As soon as the cockatoo tends to attain its sexual maturity, it will find its special mate and tend to spend almost all of their time with this special friend. These two partners tend to groom up each other; they will caress each other, sleep together and also search for their food with each other.

After all these activities, these two will form a special bond which will stay intact for the rest of their lives and will not get broken very easily. These two will raise their hatchlings together; and during this process both of these cockatoo partners will perform equally, starting from incubating the eggs in which the male will also participate and will also gather the eatables for the babies.

An interesting but strange fact about these cockatoos is that although they seem to be loyal to their partners and practice monogamy, yet it has been found through various DNA tests that it is not the real scenario. The most critical thing is that despite all their bonding, still some of the eggs from a particular nest do not belong to the father bird of that couple.

A unique feature regarding these cockatoos is their vocal capability. These cockatoos are believed to have a tremendous vocal power and the vocalization is known to be very loud and shrill. 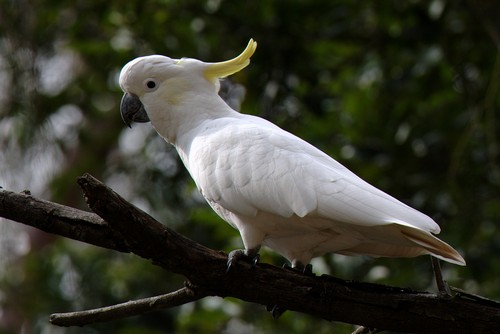 This shrill voice of theirs serve a bunch of other activities, which includes recognizing each other’s voice, their precise location, warning other group members against predatory attacks, exhibiting each individual’s mental mood, preserving the harmony of a group and as alarm signals in order to defend their nests during foreign attacks. However, it has been seen that the frequency of using such calls and signals and more importantly, some special calls vary from one species to another.

For example, the black Carnaby cockatoo can produce as much as 15 types of different noises as compared to the Major Mitchell’s, which barely produces two to three variations. Apart from these, a particular species known as the gang-gang cockatoo are known to be relatively quiet, however they tend to create soft growling sounds during the time of feeding.

There is however a peculiar species which is well known for a unique feature of it; producing sounds by beating a dead branch with a stick in order to communicate with their fellow group mates from long distances; the Palm cockatoos. There are also some species which tend to make some peculiar hissing sound when they feel threatened by the foreign intruders.

The reproduction cycle of these cockatoos end with them laying eggs. These cockatoos tend to lay two to six eggs in a group at 2-3 day’s gaps. In bigger groups, the parent cockatoos do not initiate the incubation process until the last egg from the previous clutch has hatched out. This ensures that almost all the eggs would be hatching at around the same time. However, the last one to hatch faces tremendous competition from its much older siblings for food and other necessary amenities.