The Clouded Leopard is an incredibly beautiful wildcat, the smallest of the big cats found in the wild. They are very solitary animals and a lot of study has not been done on these cats, because they prefer to stay out of sight. Clouded leopards are found in the Himalayan highlands of South East Asia, and a majority of these species are found in Nepal, Myanmar, Cambodia, Laos and Southern China. Despite their name and resemblance, clouded leopards are actually not closely related to leopards. They come under the family Felidae and are classified under the genus Neofelis.

These fascinating animals have short fur, with colors ranging from orange yellow to shades of brown and grey. They have ring markings which get darker towards the center, and possess two distinct black bars on their neck. They are marked with irregular patterns like clouds, which suggests the origin of their name.

Clouded leopards are very agile animals, and are exceptional climbers. They possess short limbs and broader paws in contrast with other big cats, with longer hind legs, which is adapted for increased jumping ability. With very long tails, which can grow up to 65cm, they have great balance and can maneuver better when stalking prey and while climbing. They also have retractable nails that are very sharp.

With very strong and enlarged jaw muscles, clouded leopards have very long canine teeth, and the upper canines can measure up to 4 cm or longer, making them the wildcats with the largest canines in proportion to body size.

Due to their highly solitary nature, a lot has not been recorded about the eating habits and diet of the clouded leopard. They prey on animals of considerable size, such as squirrels, rodents, birds, young buffalos, and domestic livestock. Remnants of fish has been found in the faeces of clouded leopards in the wild as well. They use their long sharp canines to snap the spine of their prey with a bite to the back of the neck. They then feed by stabbing the prey with their incisors and jerking back their head.

Clouded leopards are sexually mature at about 26 months, and have quite strange sexual behaviors. During mating, the male clouded leopard would normally bite the female on her neck, severing her vertebrae in the process. The compatibility of the male and the female clouded leopard is highly taken into consideration while in captivity. Over a couple of days, the male and the female will mate multiple times, with the Estrus lasting about six days, while the Estrous cycle lasts for an average of 30 days. Gestation period lasts for a period of 93 ± 6 days, after which the male abandons the female to raise the kittens. The litter size varies between one to five kittens, but it is usually three kittens. The females are able to have just one litter each year.

At birth, the kittens are blind, and weigh between 140 to 280 grams. Kittens will possess solid spots at birth, unlike the rings the adult clouded leopards possess. After about 10 days from birth, their eyes will open, and after about five weeks, the kittens will be fully active. They are helpless and totally dependent on the mother, until they are weaned after about three months. The adult coat pattern begins to form after about six months, and the kittens will leave their mother when they attain the age of about 20 months.

Clouded leopards are usually found in tropical rainforests, but they can also thrive in secondary forests and woodlands. They have been seen at elevations up to 9000 feet in the Himalayan highlands. Their distribution lies across South East Asia. The cats have three known subspecies, which reside in different regions.

Clouded leopards are rarely seen due to their secretive behavior, so most of the information known about them is derived from studying those in captivity. Very little is known about their behavior in the wild. It is even believed that the female clouded leopard hides her kittens in dense bushes when she wants to go to hunt, because the kittens are rarely seen in the wild.

They are very good climbers, and are easily the best climbers among the big cats. They possess the ability to climb down a vertical tree head first, and using their broad paws, they can hang onto branches bending their hind paws around the branches of trees. They are capable of twisting their paws to face up and down, and use their tail effectively for hanging. They have the amazing capability of climbing on horizontal branches with their back facing the ground. Pretty cool right. Using their powerful hind legs, they can leap up to 2 meters off the ground at a time.

Clouded leopards are territorial animals, and they use scent marks to warn intruders to stay away. Male clouded leopards are adapted with large sebaceous glands on their cheeks, which they rub on prominent objects to mark territory.

Unlike other cats, they are not able to emit purring sounds, rather they use a wide range of sounds such as snorts, growls, hisses and moans which they use to express their feelings to each other. When two clouded leopards are approaching each other, they emit a short friendly snort known as prusten. They can also communicate with each other by leaving scratch marks on trees. They also have long calls which they emit to ward off intruders or as a mating call between two territories.

Clouded leopards were previously thought to be tree dwellers and nocturnal, but recent studies have shown that they are not quite as tree dwelling or active at night as previously thought. They have been observed active during the day as well. They are known to retreat up into the trees after a kill to digest quietly.

In captivity, clouded leopards breed mostly between March and December, but they have been observed to mate at any time of the year while in the wild. Their young ones are known as kittens, just like in domestic cats. Clouded leopards are fast animals, and have a recorded top speed of 64 kph. They can also be referred to as Mint Leopards or Tree Tigers. 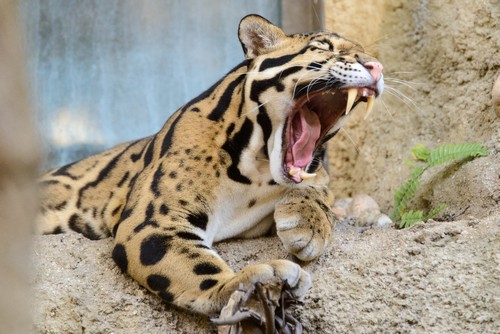 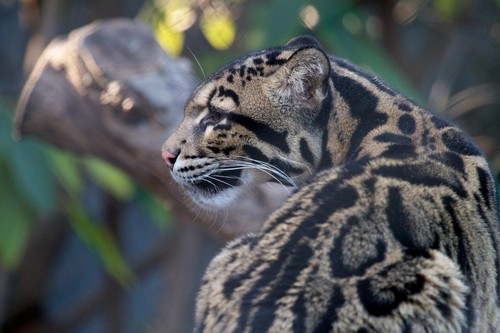 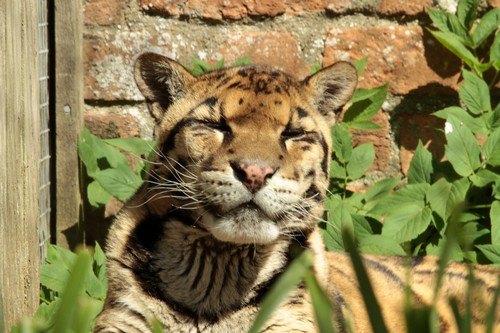 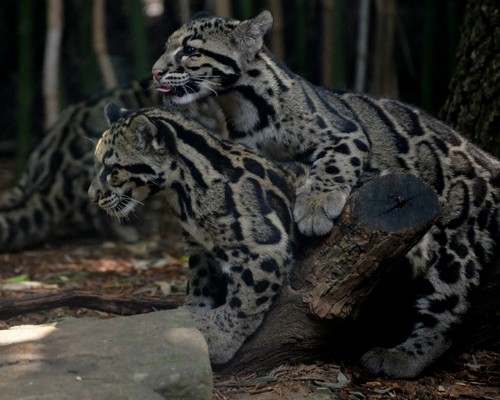 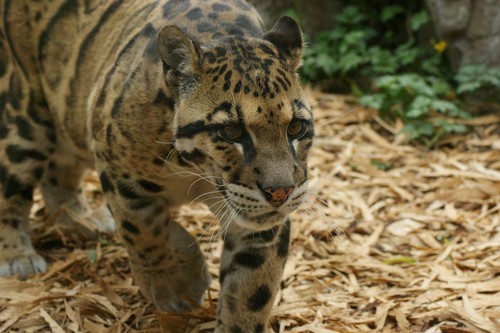 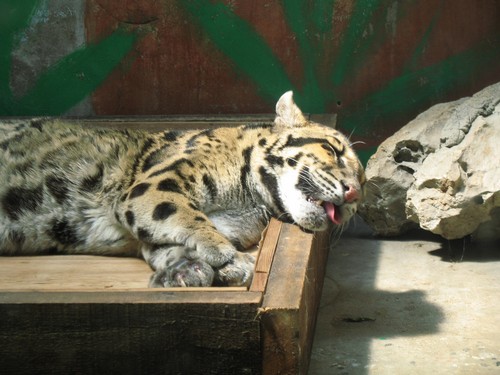 Clouded leopards do not really have any predators in the wild, except for other big cats such as tigers which are its competitors for food. Although they are still listed as vulnerable, they are not far from falling under the endangered species list with the way their numbers are dwindling. The major threats the cats face is humans, who hunt them for their meat, skin, bones and long canines. Even though the poaching of clouded leopards has been made illegal in many countries, they are still hunted in their numbers. Deforestation by humans also makes the clouded leopards vulnerable and threatens their existence. Being highly solitary animals, the cutting down of the thickets in which they thrive will expose the kittens to predators, and also create an imbalance in their lifestyle. It also increases the likelihood of the cats to have human interactions, which often results in their death. 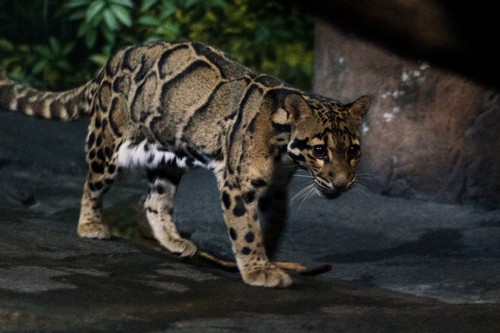 Most countries have banned the hunting of clouded leopards, although these bans are still poorly enforced in most of the countries. Although clouded leopards are listed as vulnerable by the IUCN, they are listed as under endangered species in the US, and thus the trade in the cats or any products derived from them is illegal and highly prohibited.

In captivity, clouded leopards are carefully introduced in pairs to each other when they are young, and this encourages bonding and successful breeding, considering the fact that male clouded leopards are often very aggressive towards females they haven’t spent time with. Most conservation areas keep the females in secluded areas. Feeding programs are also carefully developed to completely provide all the dietary requirements of the animals. The leopards are also provided with enough territorial space to minimize stress in captivity. This has enhanced the lifespan of the animals in conservation areas.