Have you ever thought why a chimpanzee, monkey and other apes have in common? Yes, you guessed it right. They all share a contrasting and striking resemblance to us, the human beings. It is also to be noted that these chimpanzees have been found out to be the nearest neighbors of the human beings when it comes to racial development. Everything about them, whether it be diet, behavior, reproduction, taking care of the young ones; everything has a common thread with us.
So come and embark on a unique journey to know a lot of things about our racial ancestors, the chimpanzees!

These majestic apes tend to dwell in some big social groups and they are commonly known as very social creatures. These chimpanzees prefer to be in large groups which includes both males and females as well; and these large social groups are termed as communities. Although these communities may comprise of members similar in habits and age, still these social groups are run by the strict fundamentals of a hierarchy.

On similar aspect as compared to the human beings, these chimpanzees too have a social hierarchy and the individual who leads the group and takes major decisions has a more direct influence on the group and is thus an acting head of the hierarchy.

Another interesting feature regarding these groups of the chimpanzees is that their social groups are very smaller in numbers with an idea of multiple leaders. As compared to the communities of the human beings where there is generally one alpha, the communities of these chimpanzees might have more than one alpha and these are clearly able to dominate other weaker members of the group.

It has been commonly seen that among all the members of a particular community, the ones who are typically strong males are considered as the alpha. This alpha male is considered as the de facto head of the group as well as being the highest-ranking individual that has an added responsibility of maintaining law and order among the members.

He also plays a very crucial role of maintaining harmony among the group during times of dispute and quarrel. It is not necessarily required that the leading male or the alpha male have to be the strongest and most powerful among the entire community, rather it has been often seen that the alpha male is more regularly the one who is more manipulative and can control the entire group in addition to the fact that the entire community listen and follows the particular chimpanzee without any doubt.

Similar to the process of gaining political power among the human beings, these chimpanzees tend to gain power by influencing and polarizing the members of their respective communities so that when the situation arises, this leading chimpanzee can get the whole-hearted support of its members. They also need to influence their followers in order to acquire power for future endeavors and ambitions.

It has also been seen that the alpha male continuously tends to puff up his chest and its coat in order to establish a dominating stature among its group members and walk as if its charging to threat and present itself as powerful and commanding as possible. It does so in order to intimidate its community’s members to follow him and by doing so maintains law, order and harmony among the entire population of the particular community. This behavior of the alpha male also accounts for it to stay in power and helps it to maintain itself as the so-called head of the community.

Along with the gesture shown by the alpha male, the lower placed chimpanzees of the same group show their submission and acceptance of their alpha male by their physical language and extending their arms while screaming. It has also been particularly noticed that the female counterparts of the same community will indicate regard to the alpha male by introducing their rump.

Along with the entire community, the female peers also constitute a social hierarchy which is quite different as compared to the original community they belong to. It has been seen that in certain chimpanzee communities the young female chimpanzees hold very crucial posts that they tend to inherit from their highly ranked mothers.

Contradicting to the imposing behavior of the males of the community, the females are completely different in their aspect of controlling their community’s females. Rather than dominating themselves over the weaker and smaller ones like the males, these female chimpanzees tend to work with the weaker females and make them their allies. This in turn helps them to maintain a certain level of harmony among the members and provides them access to the food resources which may be mismanaged and misused if the males get a first hand over them.

Keeping apart all the differences between both the genders, one thing that brings them together is the social dominance which both of them enjoy among the members of the particular communities which they lead.

The Freedom of Choice

It is very important for an alpha male that he is accepted by the female counterparts of that particular community. It is very important for the alpha male to find the places where they can get enough food resources for the entire community and it is the sole responsibility of the female members of the community to ensure that all the members can get enough food. 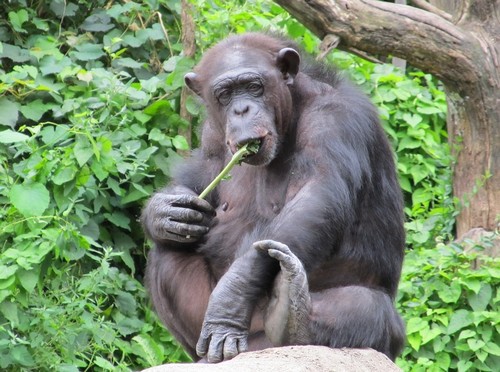 The female counterparts also possess the veto power to overthrow the alpha male if they feel that the particular alpha male is not performing his duties according to the norms and can also recommend another alpha male in which they see the potential of leading the group as well as provide all duties which is expected of a leader.

Unity Is the Key

The home of a chimpanzee is constitute of several other chimps forming a community which in turn consists of chimpanzees belonging to same family groups. It has been generally seen that these family groups consist of 6-10 individuals.

Another interesting feature of these chimpanzee communities is that sometimes the population of an entire community can exceed 100 members of which many belong from various family groups who come together for various purposes including searching possible grounds for ample abundance of food and security.

Similar to the human population, the leadership responsibility rests with a single individual, but sometimes these chimpanzees distribute their responsibilities and act as a multi leadership community. 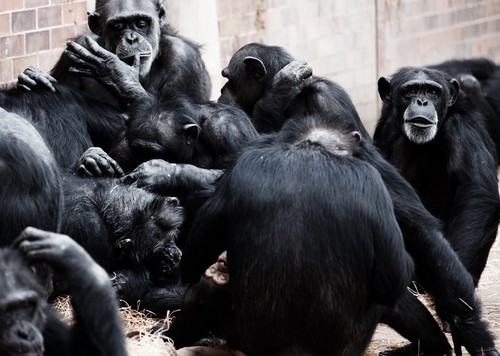 They use various bodily expressions, facial gestures, clapping, kissing as well as various activities of grooming to contact with their peers in the community as well their surroundings. Another quite interesting facts about these chimpanzees is that similar to the human beings, the males tend to spend their entire life span in the community or group in which he was born.

It is, however, not same with the females. The female counterparts tend to depart the community in which they originally belong and relocate themselves to a new community as soon it becomes an adult.

It has been generally seen that the newly born chimpanzees possess slightly reddish skin beneath their dusky hair. But this is not permanent and as soon as the chimpanzees start to age up, this tender skin fades and becomes to darken. 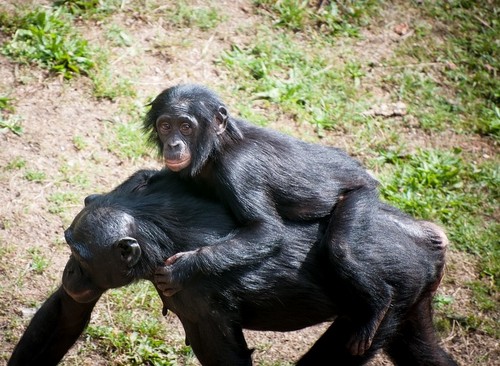 It has been seen that the young ones tend to hang to their mother’s underbody right after their birth. But the younger ones don’t follow this trend for much longer. As soon as it grows a little more, these young chimpanzees tend to shift themselves from the underbody of their mothers to the back of their mothers. They continue to ride in such a piggyback style for the rest of their adolescence, which they maintain till seven years of age. 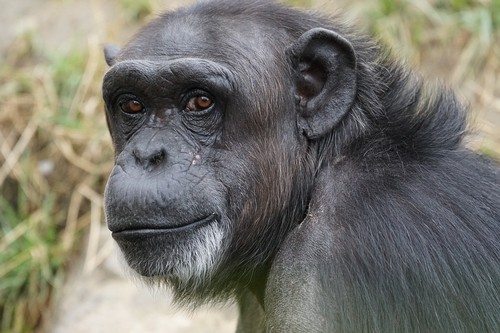 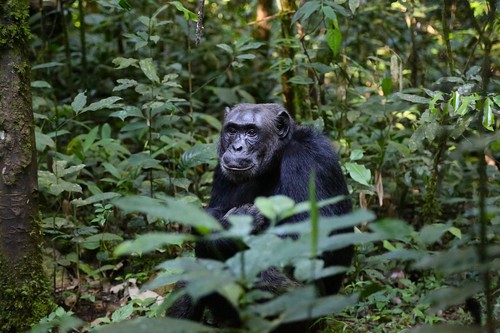 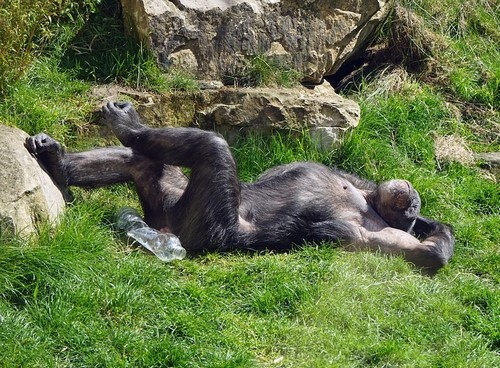 Regarding the diet of these young chimps, they are very similar to the babies of the human beings. Similar to human babies, these chimpanzees also feed on their mother’s milk for the most part of their first three years.

These baby chimpanzees start learning the first few steps of walking by the time it reaches four years. Although it learns to walk, still these babies don’t leave the company of their mothers and stay with them until seven years of age and masters all the tactics and strategies which it needs to survive in the jungle or their respective environments. 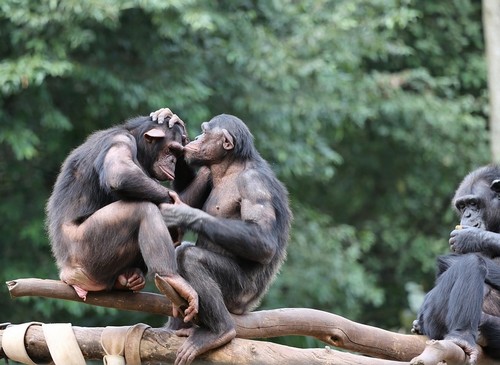 Compared to the bonding a young chimpanzee shares with its father, the closeness and affection a chimpanzee has to its mother is much stronger and generally, this bond stays for almost the entire life of the chimpanzee.