People say Cassowary is the most dangerous bird in the world. Others say that it is a shy bird, choosing to get away from human beings and keep to itself in the deep forests. Others consider it a rather peculiar bird, while others still think it is a beautiful creature. Whatever the views people have, this flightless bird, otherwise known as a ratite, is definitely an interesting study.

Meet the Cassowary and let us explore some fun facts about this bird. 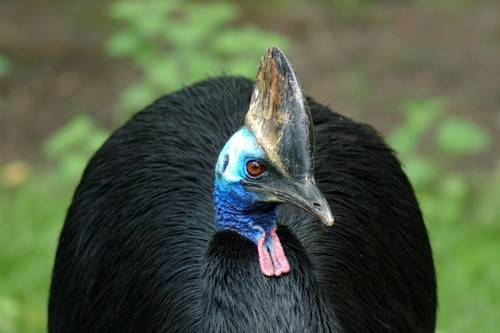 There are three species of Cassowaries, and these include:

-The Southern Cassowaries. This one is found in Southern New Guinea, Northern Australia, and Aru islands.

-The Dwarf Cassowaries. This one is found in New Guinea, New Britain, and Yapen. Mostly in the highlands.

-The Northern Cassowaries. This one is found in the Northern and western New Guinea and Yapen. Mainly in the lowlands.

Cassowaries are large birds, with the female being bigger and stronger than the male. The Cassowary will normally rise to 1.5 to 1.8 meters above the ground while some females may reach up to 2 meters and may weigh up to around 60 kilograms.

The females are more brightly colored than males. The cassowary is covered with feathers that consist of shaft and loose barbules. These are shaped in a way that will ward off thorns as they move about in the rain forest. They are pretty powerful runners and need this mechanism to prevent thorns from slowing them down. 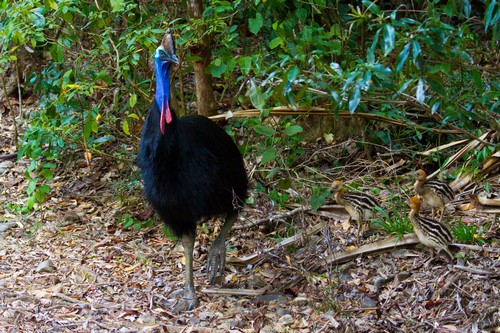 They have three toes on each foot with very sharp claws that act as a defense mechanism. The second toe, however, is five-inch dagger-like claw that has been known to cause death to human beings and dogs.

They do not have tail feathers and have small wings. These wings do not aid in flying as the bird is flightless. They can, however, run up to 50 km/h, are known to be great swimmers, crossing large rivers and swimming  at the sea. The can also jump as high as 1.5 meters.

On their heads is something called a casque. A casque starts growing at one or two years of age and is made of a spongy material that is covered by thick keratin. Keratin is the same substance that takes up your nail or the horn of a rhino. The casque is used to show age and dominance. There are proposed functions of the casque, some even leaning towards sound reception, but these are just speculations. No one has really been able to tell why the Cassowary has a casque on top of their heads.

The Cassowary has its native home in the tropical forests of New Guinea, the surrounding islands, and Northeastern Australia. Unlike their relatives, the Ostrich and the Emu bird, the bird prefers to live in the deep rainforest of the northeastern coast of Australia, away from people. Cassowaries will, however, venture into the grasslands, savannah and swamp forest. Due to the fact that human beings have built their habitats so close to them, they are at times found in contact with human beings. This, however, is a very rare occurrence. 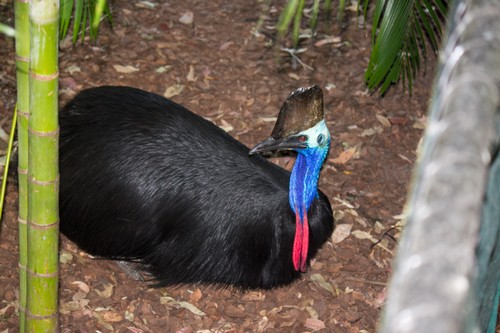 Cassowaries are known to be omnivores. This means that they can feed on anything, from small grass seeds, to tiny shoots to small vertebrates. They are, however, known to favor fruits. They will normally eat fruits from the Laurel, palm, wild grape, and nightshade and myrtle families.

When trees start dropping their fruits, the Cassowaries will move in and start eating them from the ground. A Cassowary is known to defend its tree from other Cassowaries for days on end. They will move one the fruits are finished. Another interesting facts about the Cassowaries is that they swallow the fruit whole, regardless of the size.

Cassowaries are known as a keystone species of the rainforest because when they eat fruit, the seeds get distributed along the forest cover in their excrement.

Can Cassowaries be eaten? Their meat is very tough. Some have likened it to a piece of rock. So if you are able to cook a rock, then you should have no problem cooking Cassowary meat.

The mating season for the Cassowaries starts in May and ends in June. During this time, a female will choose three males and move from one to the other. The winner will fertilize the eggs, which are then laid in a litter made of leaves. 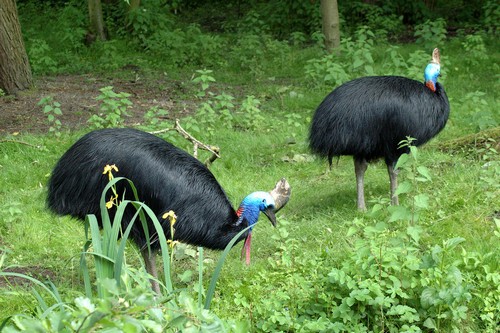 The female will normally lay from three to eight eggs before she moves on to other territories where she will mate and lay more eggs. The eggs normally measure nine centimeters by fourteen centimeters. The eggs are normally bright green or pale green-blue in  color.

This means that the female is not involved in taking care of the eggs. The male is.

During the 50-52 days of incubation, the male will stay with the eggs day and night without moving from them. During this time the male will lose a lot of weight, close to three-quarters of his weight.

His role is to protect the eggs as well as add or remove the litter from the nest for temperature regulation. Once the chicks hatch, the father then takes care of them for nine more months during which he protects them with everything he has. During this period the male Cassowary is the most dangerous. The tall bird will easily kill protecting its young ones.

Cassowaries are shy birds that prefer to live solitary lives. They will only flock when mating or at times when there’s a lot of food in a particular area.

The male cassowaries cover an area of about 7 square kilometers which he defends . The territory is for him and his mate.

While females are not naturally tied to one territory, they usually remain within the same territory all their lives. They also breed with the same males over the entire period. 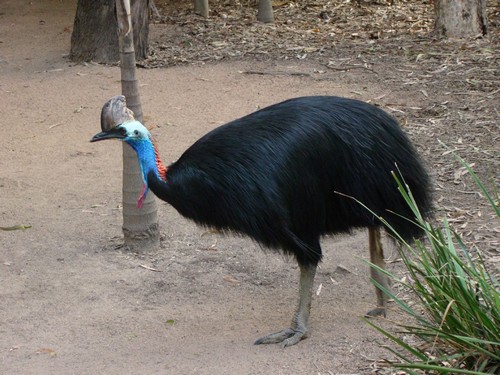 When it comes to mating, Cassowaries have a very specific ritual that is carried out by both male and female. The females will produce a vibratory sound attracting the male and the male will in turn run towards her with his neck parallel to the ground, moving the neck dramatically.

Once it stops, the female will approach the male slowly and she may do two things. She may either attack the male, sending him away or she may step on his neck for a moment before crouching low next to him ready for copulation.

The female may also pursue a male and this normally ends in water. Once the male is in the water, submerged to the upper neck, the female will join, moving her head and neck in a dramatic and ritualistic manner. This leads the male to drive the female to the shallow part where the female will crouch next to him ready to copulate. Copulation may go on for some time.

Cases have been seen where a more dominant male will run fast towards the couple and run the male off. He will then commence with the copulation.

While females do not tolerate the presence of other females, males are known to tolerate each other. 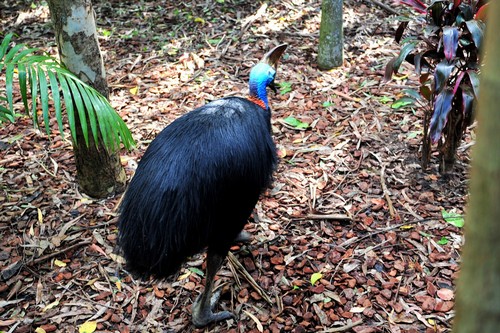 Cassowaries are considered the most dangerous bird in the world. This was confirmed by Guinness world record. This means Cassowaries do not have predators. They are a danger to other animals, including humans. Their lethal ways of defending themselves ensure that every animal sees them as a threat.

There has been, however, a natural disaster that killed a couple of them back in the year 2006. Cyclone Harry may have led to the death of a number of Cassowaries.

Conflicts between man and the bird may be on the rise because of the human race occupying their natural habitat. The government of Australia is, however, taking measures to make sure that the birds stay protected. The last conflict that led to death between man and Cassowary happened in 1926 when a bird killed a human being by kicking him on the neck. 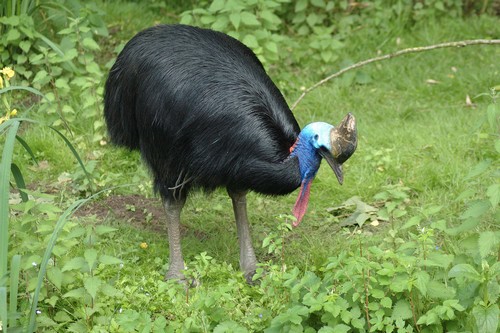 While Cassowaries might not be in  direct danger of being attacked by human beings, they might be in danger of being run over by cars which travel close to their habitats.

When startled, a Cassowary will normally run away. However, in case it can not run, the bird tends to fight by kicking. Its claws are very lethal and will leave deep and ugly punctures on their victims. Domesticated Cassowaries may also attack when frightened, and they tend to be frightened a lot. The bird is also known to move away from people, most times fast enough so that human beings can not see them.

While the bird rarely charges towards people, the cases of attacks are from human beings who approached them trying to feed them.

By staying away from their habitat and taking measures to protect the Cassowaries, these extant birds may continue to thrive for a long time.