Birds are some of the most magnificent creatures of nature. From the brilliance of their plumage to the elegance of their seamless flight, there is always a thing or two about birds that will keep both naturalists and non-naturalists enthralled. It is therefore, only right that we showcase their beauties: specie by specie.

In today’s article, we look at another wonderful bird the world is privileged to have – the cardinal bird. This relatively small creature is difficult to ignore, and you are about to know why.

Cardinals are very versatile creatures who can comfortably fit into a wide range of habitats. In the United States, they are found in most of the states that use them as state symbols.

Although they prefer the bushes which make it easier for them to build nests and create territories, they can actually survive in normal human environment. Usually, urbanization leads to loss of natural habitat which often spells doom for animals. The cardinal, however, is not affected by this. In fact, it thrives when brought close to human habitation because it loves to steal free food. Let’s get things started with its appearance.

What does it mean when you see a Cardinal Bird?

To have a better idea of what this bird looks like, we had better described its physical appearance. What are those features which when present tell that the bird in view is a cardinal bird?

Cardinal birds, or cardinals for short are small birds that have what looks like a dark mask on their head and a short conical beak. These birds which are always conspicuous have  a characteristic brilliant plumage which is mostly red. But we what we may rightly call gender inequality is that the male possesses all the brilliant coloration while the female parades a dull plumage.

When a bird bears this kind of name, you know something is responsible for it. Though you may want to think it has something to do with the four standard cardinal points, it certainly isn’t. It “got” its name from the Roman Catholic cardinal. What business does a Catholic cardinal have to do with this bird, you may ask. But then, you would discover – on closer scrutiny – that the birds plumage looks like that of a catholic cardinal’s liturgical vestments. This bird is also a symbolic of wealth, power and enthusiasm.

Like most birds of the air, cardinal birds have varying behavior from gender to gender. With the exception of a few traits, they share a couple of behaviors with peacocks. Let’s see some of these behaviors.

Male cardinal birds are authoritative patriarchs that protect their territories with their lives. Not only does it protect the space in its habitat from the unwanted presence of another male, it also does its best to protect its young from avoidable harm even as it stands to put up a fight with enemies it can contend with. This aggression gets to a very dangerous level during mating seasons. At times like this, male cardinals contend and eliminate any other bird that is within its habitat- if they can overwhelm these birds.

To get rid of the trespassing bird, the male cardinal gives a hot chase from tree to tree, branch to branch and bush to field until the intruder leaves. Its chase, together with its terrifying cries ensures the intruder is scared out of its wits and out of its territory.

After a successful elimination of the threat, they practically sing their own song of praise. Perching high in any tree of choice, they sings songs of triumph. They sure know how to celebrate victory. This is how important victory is to them, and a pointer to their selfishness too. Ornithologists have often experimented with these birds by putting a plane mirror in front of them.

This bird has an interesting array of elements that make up its diet. To have such a glorious plumage, I believe it should and actually does feed well.

Cardinals are obsessed with insects. They are not just carnivorous, but particularly insectivorous. From aphids to grasshoppers, they eat just about anything that has head, abdomen and thorax.

Cardinal birds love to feed on crushed corn, supple berries and peanuts. But then the food they love more than the rest are the seeds of safflower. But none of these compare to their love for a comfortable platform to enjoy their favorite delicacies. For birders to attract cardinals in the first place, there is need to make use of a cardinal bird feeder.

There are various types of feeders out there that you can try. There is the red cardinal bird feeder which is designed to look like a Catholic cardinal in a way. This metal feeder is pretty much easy to clean up when it gets soiled. Additionally, there is a great surface area which allows multiple cardinals to feed at the same time.

There is also a type that is built like a tower – like the Squirrel Buster – which prevents rodents and other similar natural predators of cardinal birds, from attacking them. 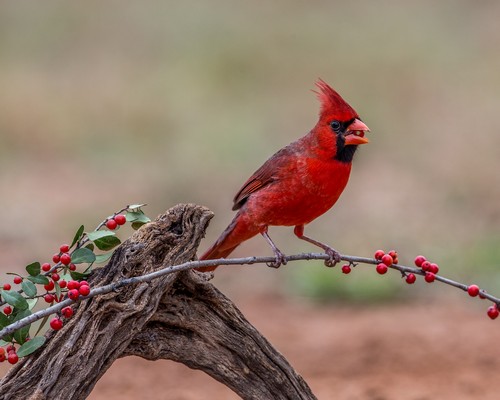 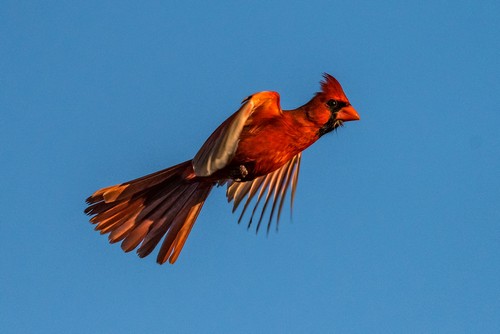 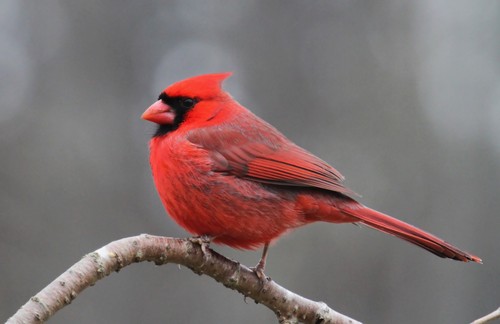 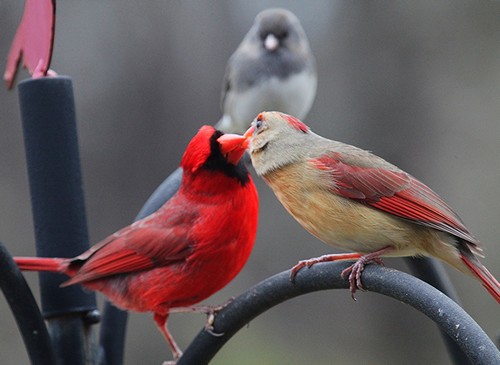 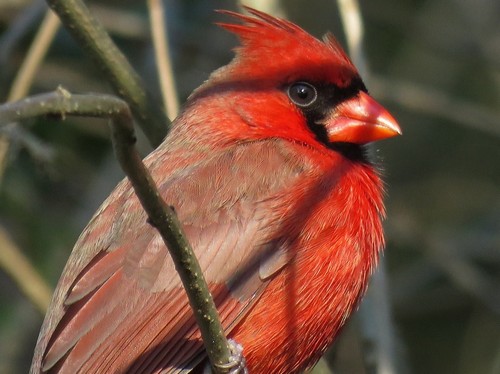 Enough of the basic facts about cardinal birds; interesting as they are, what soon follows are some of the cutest facts about the bird. Read closely as you may recognize facts you know or the ones you never knew.
Fact #1: Both Sexes Sing
Now this is a fact worth knowing. Very broadly, we can classify birds as songbirds and non-songbirds, with the male having the sole capacity to sing in songbirds. The case, however, is not the same with cardinal birds of the Americas. Both the male and female can sing, and for various reasons too. While the male bird sings during courtship to attract females for mating, the female bird sings from its nest to inform the male about the need for more food in the nest.

Fact #2: Used as State Bird in 7 States
So adorable is the cardinal bird that 7 states in the United States have chosen it as their state bird. In no particular order, these states are Ohio, Indiana, North Carolina, Illinois, Kentucky, West Virginia and Virginia, which is more than any other bird.

Fact #3: Sporting Teams Use it Too
This glamorous bird has also found use in the world of sports too. If 7 American states find this bird beautiful enough to be used as a state symbol, it then makes perfect sense that sports teams find it equally symbolic. As of the time of writing, sport teams of the University of Arizona, University of Louisville and many others use it as their mascot.

Fact #4: They Feed Each Other
Are humans going to be the only creatures that get to enjoy feeding each other when love is involved? Not by chance. Birds seem to be catching up with humans in the game of love. cardinals, for instance, have taken the whole game of love to a new level. In the heat of courtship, the male cardinal shows some love to the female by feeding it with food directly from its beak. For those who have seen this happen, it is an exquisitely delightful sight. For those who have not seen it, however, it is sure worth the investment. 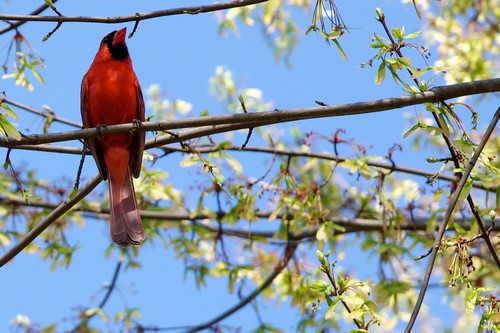 Fact #5: Can Live Quite Long
If you are versed in the knowledge of birds, this fact will not come to you as a surprise. Birds live really long, especially the ones that dwell in higher altitudes which usually come to little or no harm throughout their lifetime. Approximately 16 years is the longest recorded lifespan of any cardinal in history.

Fact #6: They “Attack” Windows
What sane creature would attack a window, you may wonder but the cardinal bird does. It seems to be so self-absorbed, selfish and egotistical that it cannot and does not stand the existence of any a beautiful as or more beautiful than it. When it attacks window panes, it does so thinking it can kill the bird it sees in the mirror – its image though. This pride is also manifest in its ruthless defense of its territory from intrusion of other cardinals and birds in general.

Fact #7: They Are Non-Migratory
They never migrate. No. Not cardinals. They are either too proud to undertake such long migrations, or too lazy to explore new grounds. The only new grounds or creatures they explore are feeders and their bird houses. It is their insatiable greed for too much food that lands them in the cage of birders. So, keep a lot of attractive food near cardinal territory if you want to catch one. 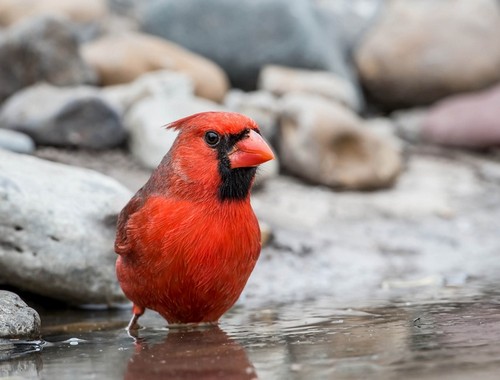 Fact #8: The Female Cardinal is a Better Vocalist!
Singing is an activity both male and female cardinals have a  natural ability for. However, they operate at different singing frequencies if I must say. While the ale sings for a shorter duration of time and in a simple way – yes, males are simple creatures – the female sings for a longer duration of time and in a very sophisticated way. Sometimes one gets to wonder if they ever sleep at all as they begin to sing very early every morning.
Fact #9: They Eat Beetle a Lot
You will not be making a mistake if you call cardinals America’s biggest beetle consumers. Research has revealed that cardinal birds eat at least 51 different species of beetles in addition to consuming various kinds of ants, termites, flies and aphids. In fact, the vast majority of insects in its habitat are neither safe nor at peace with this voracious insectivore.

The cardinal bird is one of those birds you may likely come across if you stay in North America, and one you ought to handle with care should you find one. Apart from their declining numbers which government has tried to improve via laws against poaching, they seem to love human cities a whole lot. if they love to live close to you, with the guarantee of supplying  beautiful early morning melodies, do well to provide them some food, and this partnership will benefit all involved.