There are many people who might know much about the caracal; however there are many interesting facts to note about this cat. The caracal is also known by the name desert lynx, African lynx, Persian lynx and Asian lynx; however they are not members of the lynx family, rather they are from the Felidae family. 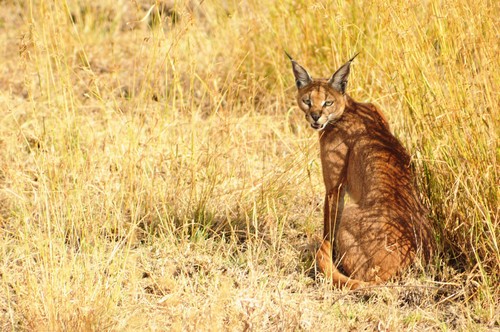 The name caracal translates to mean black ear, borrowed from the Turkish language. This is because the caracal has long hairy tufts on the ears, and it is longer than that of other cats. This makes them noticeable and so when they go hunting, they will often flatten the ears so as to prevent their prey from noticing them.

Even though they hunt for prey, interestingly the caracals can also eat plants and are known to consume berries. It is a hunting cat and there are instances in which they are kept as pets, specifically for hunting purposes. They are easy to tame and are therefore easy to keep as pets.

However, to own a caracal as a pet, one would have to part with a tidy sum of up to fiteen thousand dollars. They are natives of southwest and central Asia as well as Africa. On average, the lifespan of the caracal will vary from 10 years and go up to 12 years in the wild. In captivity, caracals can live up to 17 years.

They eyes of most cats will form slits when the pupil contract, but the caracal is different and when their pupils contract, they form circular shapes. They have great hunting skills and sometimes they will hunt larger prey, when this happens, they will eat what they can and store up the rest for later. This is done by carrying it up a tree and storing it there for later.

Caracals are believed to hold special importance in ancient Egyptian culture, having a religious meaning and there are wall paintings of caracals that have been found. 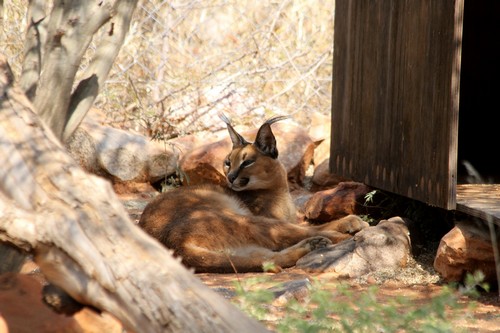 Characteristics of the Caracal

The canine teeth are long and sharp for tearing flesh. With long and powerful legs, they can be able to leap up to 3 meters high so as to catch bird which they can easily grab with their teeth. They have paws similar to that of the cheetah with the forelegs having five digits while the hind legs have four digits. Each paw has claws that are sharp and are retractable which comes in handy especially during hunting, for grabbing onto prey.

They are nocturnal cats, being most active during the night while spending the day sleeping most of the time. This habit makes the caracal very rare to see during the day and they are considered to be highly secretive cats. Furthermore, they are solitary cats and you will probably find a single caracal on its own, except for the mating season when a female and male caracal will be seen together. When groups of caracal are seen, normally it is a mother and her offspring.

They are highly territorial cats and both the male and female will mark their territories. Territory is marked using urine and this is done by urinating or rocks, hedges, trees and other vegetation within their territories. The males can have a territory that is as large as 200 square kilometers while the female will have a territory that is 57 square kilometers big. 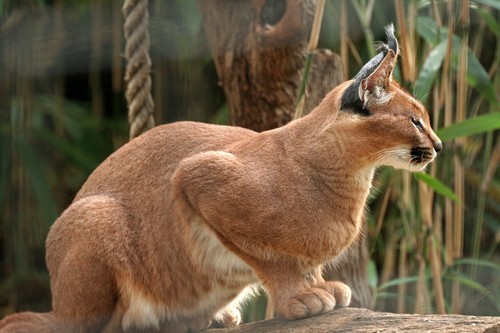 Their most noticeable feature is the tassels they have on their ears, although there are various theories as to what exactly is the function of these tassels. There are those who believe that they are for communication, others believing they are for camouflage and others say they are used to keep flies away from the caracal’s face.

Habitat of the Caracal

All animals have a habitat which they prefer, and this can be influenced by various factors such as climate, environmental factors and availability of food as well as safety for them and their offspring. The caracal has its own preference when it comes to habitat choice.

Caracals prefer the savannas, scrub forests, forests and marshy areas. They like dry areas as well as areas that provide vegetative cover which enables them to camouflage especially when resting and when hunting. 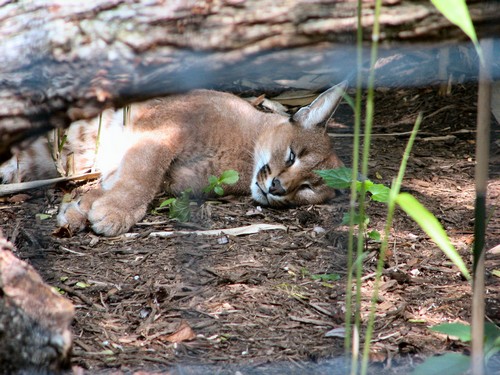 They can be found at an altitude as high as 3000 meters above sea level. Their population is spread in India, the Middle East and across Africa, especially east and southern Africa. This means that they have adapted to live in a wide variety of habitat, however the common thing is that all these habitats have some tree cover, showing that the caracal loves places that provide cover.

Diet of the Caracal

The caracal lives on a carnivorous diet, and just like other carnivores, it actively engages in hunting, using its speed, claws and teeth to catch prey. It has great speed and is highly agile with the ability to change its direction while in midair thus enabling it to run after animals that keep changing directions while running.

Although it is a medium sized cat, the caracal is powerful enough to hunt down animals that may be up to 3 times their size. Prey for the caracal will vary from bush rats, goats, antelopes, sheep, springboks, bushbucks, cape grysbok, the mountain reedbuck and the common duiker. During lean times they may eat lizards and snakes. They do not attack human beings, however they can be found near places where human beings reside due to the availability of ready meals in the form of the livestock that are kept by human beings.

With powerful legs and the ability to jump up to 3 meters high, the caracal will also hunt low flying birds, jumping high and snatching them from the air. They normally consume their kill immediately and will only store up large prey to be consumed later. 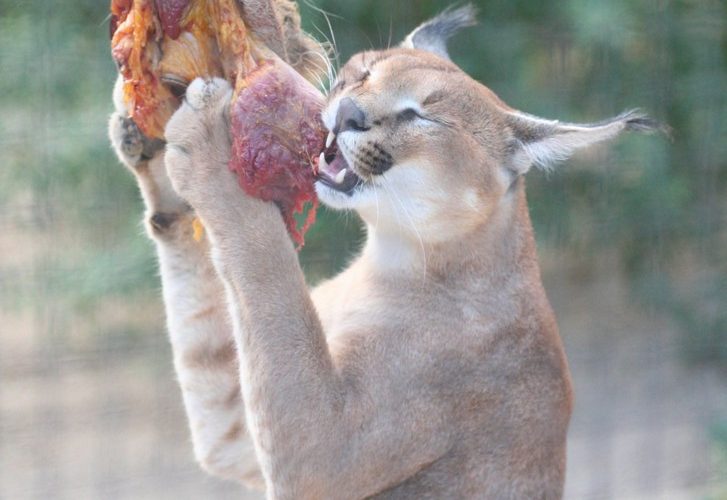 Reproduction of the Caracal

Just as with other animals, the caracals have a specific reproductive system and their reproduction behavior affects their social behavior in various ways. Reproduction in caracals has no specific timeline and it does occur throughout the year.

Being solitary animals, the male caracal and female caracal will only come together for mating purposes. The females will be on heat for up to 6 days, a period in which they will mate with several males and the female  is the one that decides on which male to mate with depending on the social hierarchy position of the male, amongst the available males.

Since the male wants to ensure that it is he who sires the offspring, some males will stay around the female during this period so as to prevent her from mating with other males. The female will often mate with the largest and strongest male first. Upon successful mating and once the female is no longer in heat, the male and female caracals will go their separate ways. 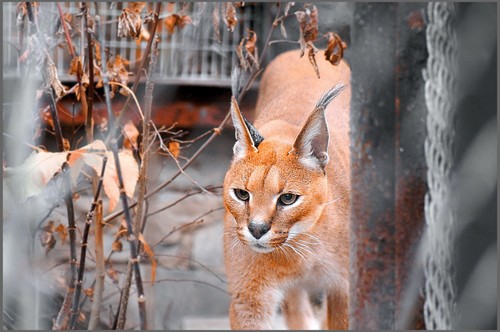 With successful mating, the female will become pregnant and the pregnancy will vary for a period ranging from 70 to 80 days, after which there are 1 to 6 cubs that are born on average. The cubs will stay hidden in a den until they are about one month old and that is when they gradually start going outside the den.

They are born blind and will stay blind for up to ten days after which their eyes open. They start eating meat when they are 2 months old and they become sexually mature at 1 year, after this they start becoming independent and may leave their mother shortly after. Once they leave, they will go away to establish their own territory, living a solitary lifestyle just like other adult caracals.

Conservation of the Caracal

The caracals occur in a widely spread manner across various locations in the world and as such they are not considered to be threatened and they are therefore taken to be of least concern. The main threats for the caracal come in the form of habitat loss due to climate change and human activities, being killed by human beings due to the threat they pose to livestock and being killed by larger cats and other animals that view them as competition for prey such as lions, cheetahs, leopards, and hyenas. 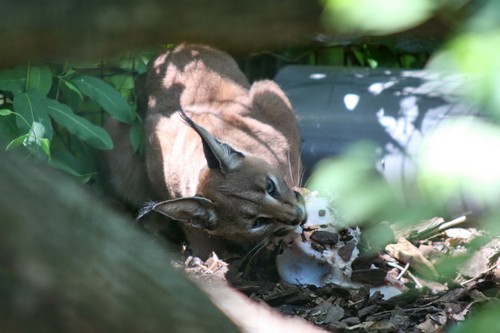 However, there are areas in which the caracal is protected so as to prevent humans from killing them at will so as to protect their population.