There is hardly a snake in existence that is not interesting to in one way or the other. The boa constrictor is not an exception. This unique reptile doesn’t only rank among the world’s largest snakes, but among the most popular ones too.
Read on to know more about this snake. 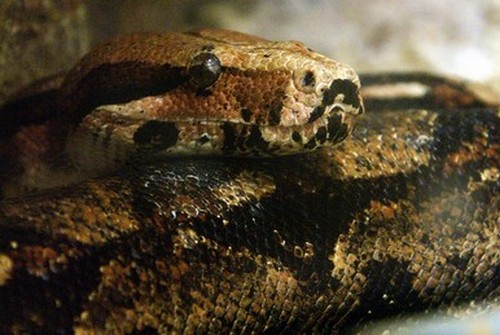 As it is with virtually all reptiles, the boa constrictor has a triangular head with two very sensitive eyes. Usually, a heavy black marking runs from the snake’s snout to the top of its head only interrupted by a black triangular pattern found between its eyes. From the back of its head to the tip of its tail, there is a beautiful pattern of alternating black, grey or brown patches.

Boa constrictors exhibit sexual dimorphism, this time the female is longer than the male.

On the average, boa constrictors weigh 45 kg with length of between 6 and 10 meters. Impressive as this length is, it is a lot shorter than what would be expected of an adult anaconda or a reticulated python. 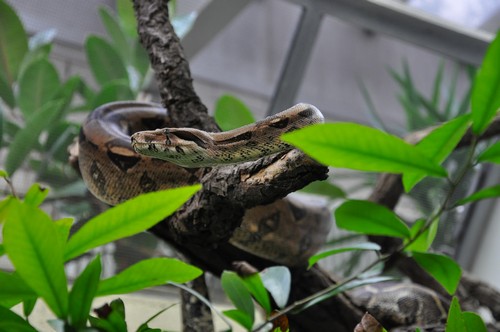 Although boas are widely distributed in in the wild in Africa, the boa constrictors are native to the Americas. But though it is often misconstrued that boa constrictors live in the densest of jungles, the reverse is actually the case. These snakes have a very wide range of habitats. Their most common habitat is the rain forest. But then, they have been reportedly found in semi-deserts, deserts, drylands, forest floors, woodlands and shrublands.

Boa constrictors have an interesting reproduction process. Though they lead a solitary life, they often have the time for mating.

When it’s mating season, which usually spawns over 5 months, they notify their male counterparts, who track them so that the copulation will take place. You will read more about this in succeeding subtopics.

This reptile has a behaviour characteristic of big snakes. As we shall soon see, it has the same slowness and gentility common to pythons and anacondas.

When young, they spend half of their days on tree tops and the other half on the ground. Being nocturnal animals, they hunt and move about more at nights, However, they don’t waste their days. It is very common to see a boa constrictor enjoying the radiant beams of natural sunlight on afternoons. Another interesting fact about their movement is that they move straightly, without having to slither to and from in opposite directions. This is made possible as a result of their impressive size. 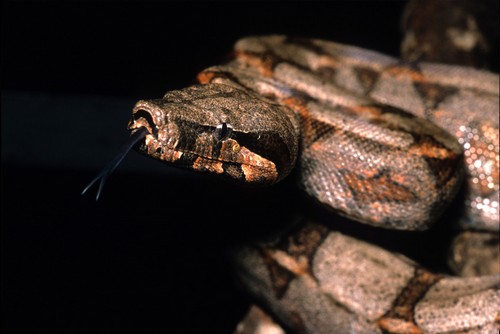 For an animal that is as large as the boa constrictor, it is expected that its diet should consist of a lot of meat. And in truth, the boa doesn’t disappoint. Let us now consider what it eats, how it hunt them, and how it eats them.

Smaller boa constrictors hunt and eat lizards, eggs, small birds and toads. For the bigger ones, monkeys, pigs and deers are more appealing. Whether they are eating small rodents or bigger mammals, boa constrictors exhibit unmatched expertise in the business of constricting their preys. What they usually do is silently stalk their preys or lay ambush for them.

As soon as an unsuspecting prey comes into view, it captures it with its two hooked teeth, then it curls its powerful muscles around the prey; squeezing it. Each time the prey breathes, it tightens its grips, crushing it further; this kills the prey in seconds.It will then swallow the prey whole. 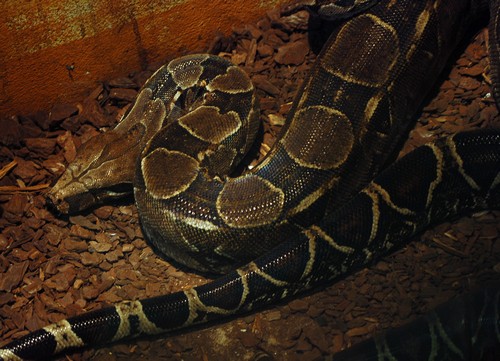 They Grow Throughout Their Lives

Most people often say the sky is their limit, but for the boa constrictor, the horizon is its limit. Sure it is not the longest snake in the world; it has the anaconda and the python to compete with. When it comes to length however, what is most striking about this reptile is the fact that it grows throughout life.  At birth, it is 2 feet long and over the first few years of existence can easily grow up to 13 feet. Some boa constrictors have been known to exceed 13 feet in length.

They Bear their Young Ones Alive

Unlike most other snakes in the wild, boa constrictors don’t lay eggs. When it’s time for parturition, this snake ejects live offsprings from its reproductive opening. Sometimes, as many as 60 of these offsprings which are 2 feet long are born at once.

It is a Sacred Animal in Parts of Africa

Before the advent of Westernization in Africa, there were, and probably still are, many African tribes that worship the boa constrictor. In Nigeria, for example, killing the boa constrictor is a sacrilege to the Idemili people of the south-east of the country. It is more like a pet of the gods whose presence could be a harbinger of good or doom.

It is one of the World’s Slowest Snakes

Snakes are naturally fast; especially the venomous ones. But it would seem that the bigger a snake becomes, the slower it gets. Being a big snake itself—on the average, boa constrictors weigh over 100 pounds—the boa constrictor is slow to action, and often appears timid. They slither at just 1 mile per hour, preferring to lie in wait for their preys than to strike viciously on site. 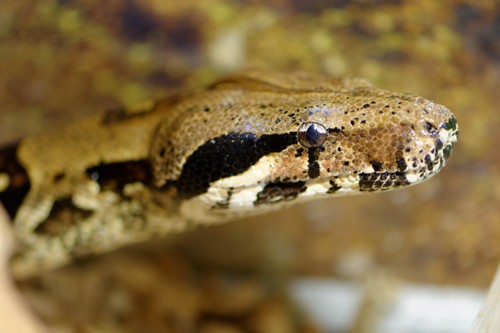 They Have Teeth Too

All boa constrictors have a pair of hooked teeth in their mouths. These teeth are not like the regular fangs popular in the ranks of venomous snakes. These teeth lack venom but are very useful to the reptile. They use these teeth to bite and hold on to their preys even as they begin to crush it with coordinated constriction from their bodies.

They Are Excellent Climbers

It is very unlikely that a snake as large as the boa constrictor will be able to climb trees but that is just the case with these snakes. They seem to be gifted with mobility in various media, except the air of course. Not only can these snakes easily climb trees where they hunt monkeys and squirrels, but can also swim on water. They however, prefer to live on land.

Red Indians Use It as a “Pesticide”

A boa is an unlikely animal to use as a pesticide but then the original Americans believe it can do the job excellently well. The boa constrictor is not like the regular pesticide, but it is one in a way. Since it has excellent hunting skills; it can hunt with incredible quietness and incredible precision, the native Red Indians of America use it as a living pesticide to get rid of pests such as rodents, lizards and more.

They Mate Between April and August

According to observers, most boa constrictor are known to mate during a window of 5 months which starts from April and ends in August. In this mating season, the female boa lets out a specific odour which male boas can smell. This odour leads the male to the female for subsequent copulation which leads to the birthing of 5 dozen young boas at the appointed time. Here is where the fun lies. A number of male boas track the female and engage themselves in a battle. The winner of the quest becomes the most dominant of the males and is allowed to mate the female boa. 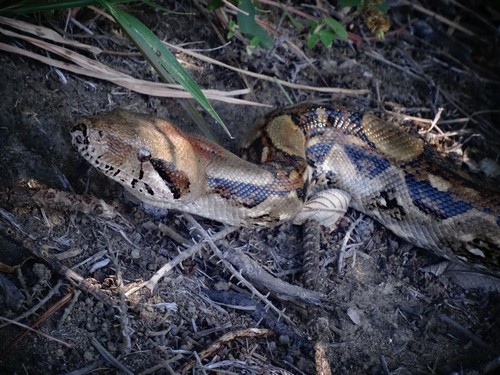 The Boa Constrictor is a Solitary Animal

They don’t believe in, or like the rumble that comes with communal life. They are not egregious in nature as each boa leads a separate life. For the females, they have no business with the males and this happens only when they are ready for mating and only during the mating seasons. On average, one would see a boa constrictor hunting alone at night: slowly, steadily, but very accurately.

The boa constrictor is a beautiful snake. It has a dark line which rises from the tip of its head and terminates at the part just before its eye, below a black triangular patch. From there one, and to its tail-end, there are beautiful diamond-shaped patterns of black and brown which adorn its velvety skin. Not only does this pattern give it the beauty deserving of its gentility, it also allows it to blend easily with its environment; a feature which makes it a very effective hunter.

The Boa Constrictor Has Heat Receptors

For a snake as slow as the boa constrictor, there must be a sophisticated system for prey detection and apprehension and this is where the boa’s heat receptors come in. The boa’s heat receptor helps it detect preys even from a distance; then it combines its noiseless slither and the element of surprise to capture its unsuspecting prey which it usually swallows whole. 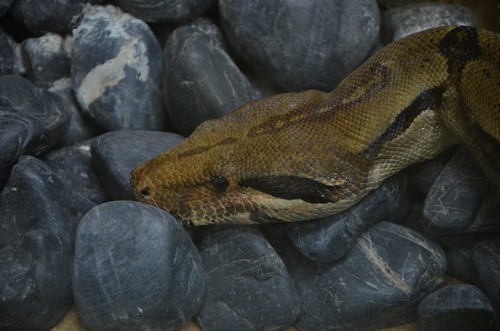 Maybe it’s because they are fat and lazy. Maybe it’s because they didn’t master the art. Whatever the reason, boa constrictors do not provide parental care for their young ones. The only care they provide, if any, is to bear their young ones. As soon as this is done, the young snakes are practically on their own. They deal with predators and preys by themselves from that stage till the rest of their lives.

They deliver their young ones alive yet are not Mammals

It is important to know that boa constrictors are generally not harmful to humans, Like most other animals, they retreat when they spot humans. In fact, they are on the receiving side of the whole brutality as since time past, humans have been killing these snakes thinking they are dangerous.