Black Jaguar is a close cousin of the leopard and the only panther native to the Americans. DNA evidence shows that the tiger, lion, leopard, jaguar, snow leopard and clouded tigers share a common ancestor. Their appearance is similar, their color and marking even make it hard for people to distinguish them. The difference is hidden in the rosettes of the jaguars where unlike the leopards, the jaguar’s rosette has one or two spots. The jaguars are also much bigger, with shorter legs and tail than their cousins. Black jaguars are sometimes referred to as black panthers. The name jaguar has its origin from the Indian name `yaguar’ meaning “the killer that often overcomes its prey in a single wrap”.

As mentioned earlier the jaguar’s coat look similar to that of the leopard, with large rosette that bear one or two spots. The jaguar also occurs being melanistic that is, a black coat. However, the rosettes are still visible. There have been reports of albino jaguars sometimes called the white panthers. Melanism is common in regions of dense forest, thus it is thought to have selective advantage. The jaguars have a bigger head, compared with their cousins’ leopard, with more compact body and powerful paws. An adult male individual has a length of more than 7 feet and can weigh 150-200 pounds. The females however are 10-20% smaller. An adult female has a length of about 3.7- 6.1 feet and weighs about 90-120 pounds. Their short stocky limb structure makes them to easily adept to climbing, swimming and crawling.

Rainforest, savanna and swamp are the common places to find the jaguars, sometimes the jaguar’s habitats are found in the desert or scrub countries. Wherever it is they are found, the place should have at least fresh water as the jaguars are great swimmers. The jaguars were once found in the United States. However, in the late 1940s they became extinct. The individuals were later identified in Mexico and Central America. The biggest population is found in Brazil, Bolivia and Paraguay.

The reproduction characteristics of the jaguar are unique. It is one of the world’s species that do not have specific breeding period; they will mate at any time in the year. Conducted studies also support this, stating that the jaguar shows no variation, seasonally, in semen characteristics and the quality of ejaculation. The fertile period of the females is between 6 and 17 days from a cycle that is usually 37 days long. Increased vocalization and urinary scent are the key factors that enable the female to advertise their fertility. After mating the pair separates with the female taking over parenting role. Jaguars have been selectively breeding for decades. Captive black females are believed to be less fertile than the spotted. Their gestation period is usually 100 days after which the female gives birth to 2-4 cubs. With high risk of infanticide, females will not tolerate males after birth. The cubs are born blind and gain sight after about two weeks.

Weaning of the cub is done at 3 months. However, the young ones stay in the cubs den until they are 1-2 years. After which they leave to establish their own territory. The males become nomadic until they succeed to claim their own territory. The jaguar attains sexual maturity at the age of 2-3 years for females and 3-4 years for males. Jaguars can live up to 20 years.

The solitary nature of jaguar is seen outside mother-cub groups, just like in most cats.  Adult jaguars only meet to court and mate. Jaguars show minimal non-courting relationships. The other major reason for adult meeting is to carve out their large territories.

However they will avoid each other as much as possible. Just as other big cats, jaguars mark their territory with urine and tree scrapes. These individuals are solitary and terrestrial hence, it is an expert in tree climbing. Jaguars use a variety of vocalization in communication; this includes grunts, roars and meows. Roaring is a communication means with which it warns territorial and mating competitors and it is characterized with repetitive coughing.

Jaguars have dietary needs same as other carnivores, feeding only on meat. This individual will run after any animal that is near him. They are opportunistic hunters with their diet consisting of even 87 species. However, their favorite preys are the peccary, which is a type of a wild pig, and the capybara, the world’s largest rodent.

Jaguars also love fish, caiman and tapirs. Unlike other cats, once a jaguar has caught its prey, it pierces the skull between the ears to deliver a fatal bite to the brain with their canines. This method of killing is assumed as it is because the prey wants to demonstrate how powerful their canines are. The powerful jaws also enable the jaguar to pierce turtles shell. A single jaguar can drag a 360kg bull in its jaws and crash the heaviest bones. In the early days study the jaguars were said to be nocturnal.

However in recent studies the jaguars are said to be active 60% of the 24 hours. Hence, they are active during daytime and very active at dawn and dusk. The jaguars can therefore be presumed to be more energetic than their cousins, the leopard. Although they are carnivorous, jaguars sometimes consume Banisteriopsis  api’s roots. On killing its prey, jaguar drags it to a thicket where it will feast on it. Jaguar eat their prey in a very unique style since, instead of starting to eat it from midsection, jaguar start by eating  it from the neck towards the chest. Jaguars are friendly and rarely attacks humans.

Deforestation and fragmentation of the forest makes jaguar vulnerable to predation by man. People compete with jaguars for prey thus, when spotted it is killed to reduce the competition. Jaguars also kill cattle, dogs and cat thus, hunted too. Their extinction in the late 1940 explains vulnerability of jaguar to persecution. Jaguars are also hunted and trapped for their pelts. An adult jaguar is on top of the predation list meaning it is not preyed on in the wild, it is an apex predator. This means that man is his only threat.

There is a big need for conservation of these rare cats. They need to be taken seriously as they are at a high risk of becoming extinct. Their population is only 292 worldwide. Jaguars are very much dispersed, they are found in about 18 countries, each of which has its own policies thus, making their conservation difficult.

However, due to the human poaching, there is protective legislation that has been put in place. Poaching has declined when anti-fur campaigns and CITES controls led to shutting down of international markets. This therefore means that jaguars are fully protected at national levels across most of its range. 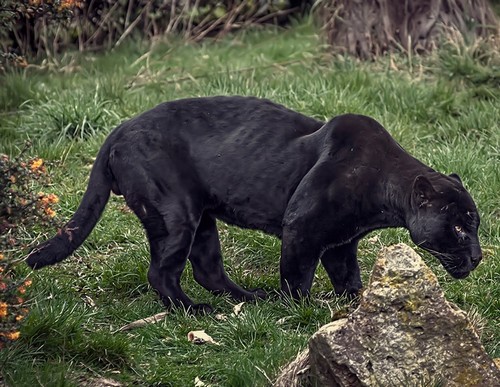 Hotspot conservation method has also been applied. In this method, an area with 50 jaguars is made to jaguar’s conservation unit. This area is then made to be as comfortable as it can be to the black jaguars. This can be done by ensuring the integrated unit size is enough, connectivity, habitat quality and prey population. It is very necessary that jaguar’s habitats are interconnected.

Another protective  measure is educating ranch owners and also promotion of ecotourism. Jaguar are umbrella species, this means that if it is protected, other species of smaller range will also be protected. Ecotourism is a method used to increase public interest as well as earn revenue for the country. 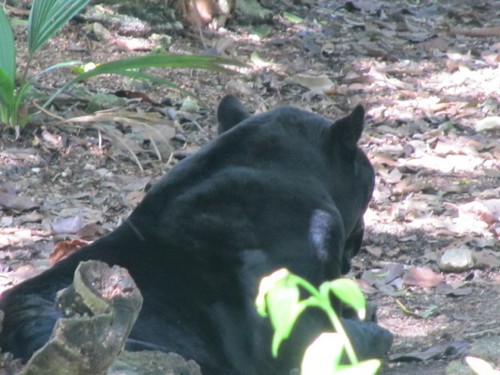 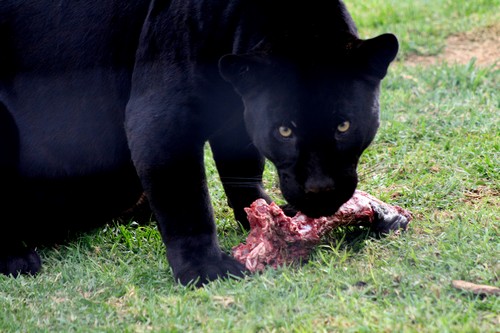 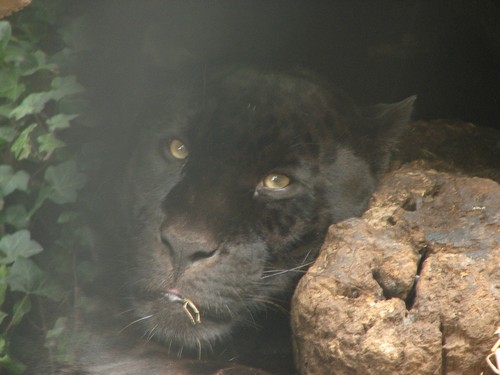 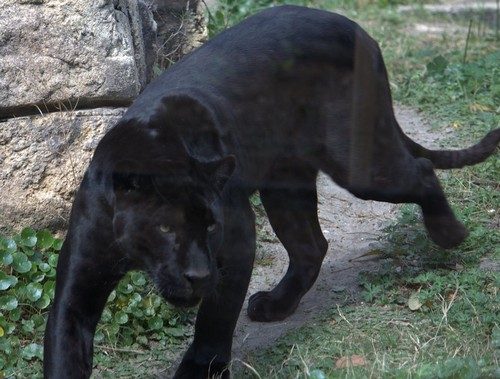 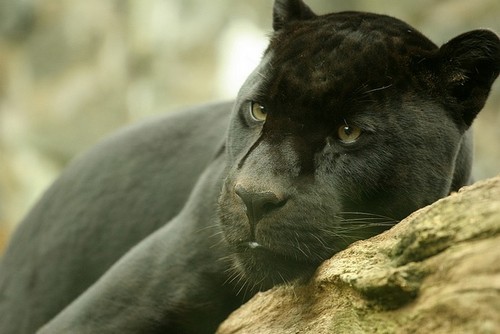 Jaguar and its name are used to symbolize various cultures. In Guyana, Jaguar is the national animal and also features in their coat of arms. A jaguar silhouette pouncing towards a hunter is featured in the Amazonas flag department, a department in Colombia. In the bank note of Brazilian Real the jaguar appears. Jaguar is a common fixture in the methodology of many South American natives. Its symbol portrays the animal that gave humans the power over fire. Jaguars also features in many product name, it is commonly used for a British car brand. In sport franchises, jaguar also features like the NFL’s Jacksonville jaguar and the Mexican soccer club Chiapas F.C. In addition to that,  jaguar was also adopted as the first Olympic mascot. In pre-Columbian central and South America, jaguar was used to symbolize power and strength. The moche of the northern Peru used jaguar to symbolize power in many of their ceramics. Jaguar was considered sacred during their religious rituals in the religion of muisca of Colombian Andes. The muisca people were supposed to dress in the jaguar’s skin. In the later Maya civilization, protection of the household and communication between the living and the dead was believed to be facilitated by the jaguar. Jaguar was used to represent the ruler and also warriors in the Aztec civilization. 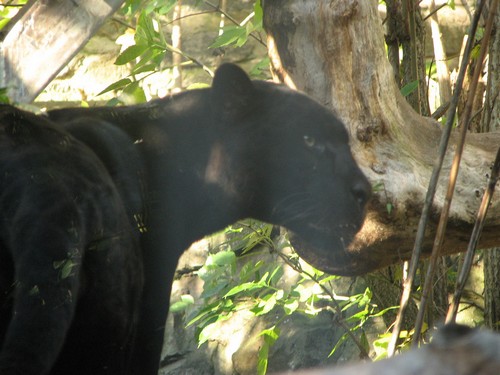 Jaguar is a large panther, the only panther native to the Americans. It is third largest after the tiger and the lion. Of the three, the jaguar is the strongest. Jaguars show a lot of similarity with the tiger, from habitat to behavior. However, the jaguar is larger and sturdier. Their color helps them mainly in hunting and results from a surplus of melanin.