The best lesson you can learn from Bat Eared Fox is ‘unity.’ You will never find them fighting each other or even preying on each other. The male lowers itself to a point of taking care of the young ones.  When another female is asked to come and assist in taking care of the young ones it does not refuse or give excuses.  You will not find such unity that bat eared foxes have with any other animal, not even in human beings.

To start about their physical description, the Bat-eared fox is a canid which mainly lives in African savanna. It has this name because of the size of its ears which are usually 13 cm long which compared to its body of 55 cm(head and body). The ears are big mainly because they are used for thermoregulation.

Bat-eared fox which is sometimes referred to as big eared, black-eared fox, cape fox or delalande`s fox; has tawny to grey fur. it has black ears, legs ,muzzle and mask around their eyes. Its scientific name is Otocyon megalotis. The genus name otocyon has its origin from the Greek word otus for ears and cyon for dog. The specific name, megalotis, is also Greek word mega for large and otus for ear. As mentioned earlier , the black eared mainly are in African savanna. They occupy Africa in two groups; one occurs from Ethiopia and southern Sudan to Tanzania. While the other group occupies the southern part of Africa. That is, southern Zambia, Angola to south Africa and Mozambique.

The bat-eared fox lives mainly in the short grassland, as well as the more arid regions of savanna. It tends to prefer this kind of habitat as it hunts in the short grass and low shrub area. However, it also may venture in tall grasses and thick shrub in order to hide when threatened. Bat-eared foxes usually build their own self dug houses for shelter from extreme temperatures, wind and also to raise their young ones there.

Bat- eared fox is an insectivore, and mainly feeds on harvester termites and dung beetle. However, when the termites are not available, the bat-eared foxes feed on arthropods and  lizards, small rodents, the eggs and chicks of birds and sometimes plant matters.  It uses its ears in locating its prey. It mostly relays on the insect they feed on in fulfilling their water intake needs. Due to their insectivorous nature, their teeth have some adaptive characteristics that enable them feed on insects. For example, the teeth are small and have an extra 8 molars to enable grinding of the hard casing of the insect they are feeding on. Since the ants are found mainly where there is plenty of grass, the bat eared fox will mostly be near large herds of hoofed animals as the dung beetle will also be found in their feces.

The bat-eared fox do most of foraging during the night especially in summer.  They do sleep and rest during the day and will come out at night when it is dark and look for their food.  It is also an important time because most of their prey are asleep and defenseless.

Hunting is done in groups, either in pairs or groups of three. Unlike other predators which locate their prey mainly by smell or sight, bat-eared fox locate their prey primarily by auditory means. Their foraging pattern varies between seasons and coincides with termite availability. During winter foraging is mainly done during the day because it is usually very cold during the night.  Since the bat-eared fox are very social and lack territoriality, they are able to forage even in bigger groups as they are less likely to fight for food.

Even if the bat-eared fox are social, the male is monogamous.  It will mate with one female in his entire life unless one partner dies. The male will identify his suitable female mate.  The two will has close contact and as the breeding time approaches the bond between them will strengthen.  You will mostly find them together.  Mating will take place.  Then both the female and the male will modify the den site they used it before or will dig new ones.  Mostly these den sites are usually burrows dug by other animals and the bat-eared fox will modify them.

The male is left with the pup in the den to offer them protection while the mother goes out to look for food which she eats so  it can be converted to milk which the young ones will suckle.  Sometimes many pups are born to this one female bat-eared fox and feeding them proves an impossible task for a single mother.  The parents will call for the assistance of one of their previous daughters.  This daughter will go out look for food which she brings to the male bat-eared fox.  She also suckles some of the young ones.

As the pups grow bigger, the demand for sufficient milk can no longer be met and the mother and the assistant will now bring soft prey to the pups.  The pups will now start learning the kind of food good for them.  They will now start going out of the den.  This time the work of the male of protecting the pup becomes more challenging because the pup do not yet know who their predators are and what to do in the event they come across them.  When a predator is seen near the den the male will immediately move the pups to a new den.  Most pups die of starvation especially if they are born in the season when food is scarce.  Others are eaten by predators who get access to the den when the male goes to look for food.

The pups are now old enough.  They stay with their parents until when they are about 18 months.  They may decide to leave the pup and go look for their mates.  They will now build their own dens and give birth to their own pup.  The parents will mate again and also give birth to other pups.

In east African areas, the bat-eared fox are nocturnal almost all year round. However, those in South African parts are only nocturnal in the summer and diurnal during the winter. Bat-eared foxes’ behavior are highly social and often live in groups. The groups may even consist of up to 15 foxes which play, forage and stay altogether. The bat-eared foxes use a lot of non-verbal cues in communication. For instance, when in threat or showing submission, they pull the ears back towards the head, the head is kept low and the tail is put in an inverted U shape. When in extreme danger, they tend to make their hair stand straight. When running, the tail is put straight and horizontal.

Bat-eared fox has a great sense, they can sense a person even at 30 meters away. The recognition process takes place in three stages. First the bat-eared fox will sense and ignore. Later it will stare intently then finally approach or attack. When greeting another bat-eared fox, the approaching fox keeps his head and tail low with ears backwards as a sign of submission. The receiving individual will have its head high but tail down. They also use vocalization in communication. 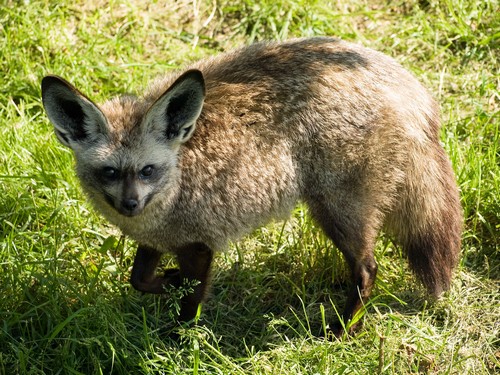 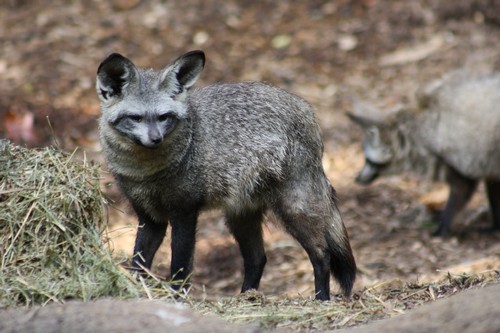 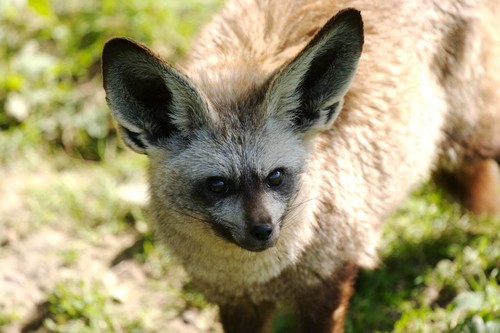 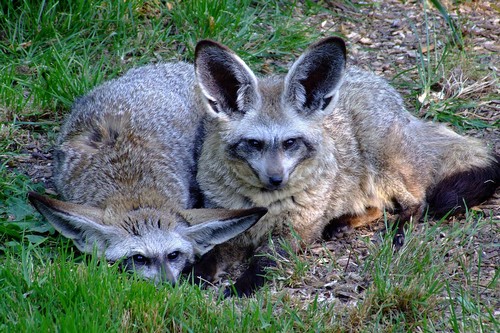 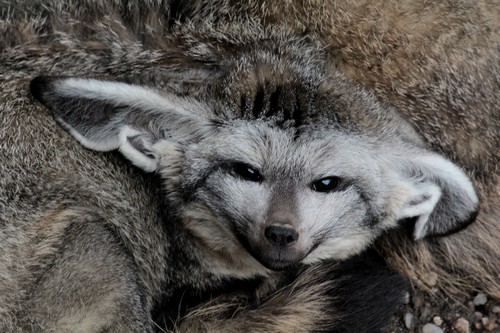 Since the bat-eared foxes are an easy target to predators like large carnivores e.g. lions, leopard, cheetah, hyena and African wild dogs, thus it is necessary that they have to develop some mechanism to avoid being preyed on. The bat-eared fox depend on its speed and its perfect dodging ability. Most bat-eared foxes move in groups and therefore when their predator approaches them, they do run in different directions and distract the predator because it will not know which prey to follow.

One of the benefits that we can get from bat-eared fox is that they help in termite population control, which are considered as pests. They are also hunted for their fur. 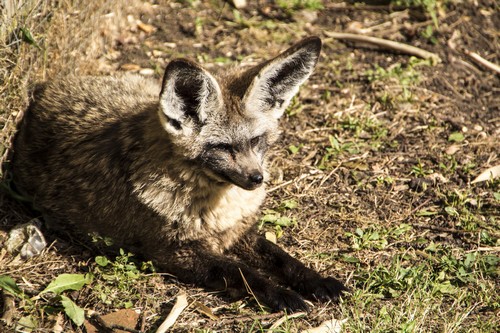 As the human population increases there is need for expansion and as a result trees are cut down and vegetation destroyed. More homes and infrastructure are built.  In all these, the bat-eared foxes’ habitation is destroyed and their food is also destroyed.  These bat-eared foxes die of hunger.

The people have also contributed greatly for their decease because they have been hunting them down, killing them so that they can get their fur which they sell to get some income. 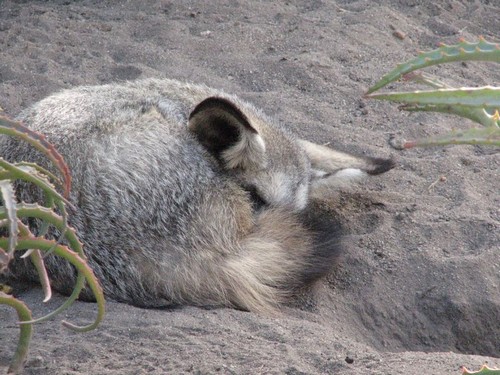