Whenever lemurs are thought off, there is a confusion that lemurs are the ancestral primate. However, when you take keen interest in the life cycle of baby lemur, you will understand that they just evolved independently and have no relation whatsoever with the emerging of apes and monkeys.  All being said and done, lemur belong to the superfamily of Lemuroidea, order of primate suborder Strepsirrhini and infraorder of Lemuriformes.

The name lemur derives from the word lemurs, which basically means spirits or ghosts. According to the community around where lemurs are found, this name fits perfectly with the characters of the animal. It has a haunting look and it’s extremely active during the night unlike other animals and for this reasons, it was believed that baby lemur represents spirits or ghost.

There are over 50 living types of lemur. Their existence has so much to do with their physical characteristics in one way or the other. Baby lemur is just a part of the so many species of lemur that currently have about five different families. The biggest lemur was found to be almost the same size as the gorilla. However, today, lemur lives up to a standard house cat size.  Lemurs are arboreal animals and they have their habitation on trees.  Therefore, most of baby lemurs time is spent on top of trees in the rainforests.

Although they belong to the same primate classification, lemurs don’t hang on trees with their tails like monkeys do. Basically, this is because their tail don’t have the power to hold them up as that of a monkey. Alternatively, we can say their tail is not prehensile as of monkeys. However, baby lemurs have long and wet noses.

The reason why lemurs are able to be active both during the day and night is because they have a very sharp eyesight. Their vision is good and therefore, they can operate and see danger from a very far distance. Thus, when they are eating or playing around the trees, they are able to scan around miles ahead and advance their predators in case of emergency.

In relation to their sight, lemurs have a good sense of smell. The sense of smell helps them to tell when there are intrudes within their home range. The best thing is that, through their ability to smell, lemurs can tell the difference between the intruder even when they are asleep. So, plan on the next safety move depending on the intrusion. Lemurs use this smell sense even to communicate amongst themselves.

Lemurs have big toes and thumbs that are opposable, but most times, you will find them using their extended toilet claw on their hind second feet toe and teeth for glooming.

Lemurs just like other primates, live in a family cycle but the only difference between them and the others is that female lemurs are the dominants of the group. For this reasons, female lemurs that dominate the group have more privileges over every other member of the particular family. When it comes to eating, the dominant female gets the first choice, when it comes to mating she gets the first choice and so much more. Anything that the group does, she gets the first attempt before any other member simply because she is in charge of the entire family.

Baby lemurs diet is pretty simple. They don’t have much as food. Lemurs, just as the other primates, find their food from their habitation.

Being arboreal animals, most of their diet is from the same trees they live on. Baby lemur eats up to 70% of plantations within their area with a high concentration of fruits on their diet. This is because fruits are nutritious and provides them with enough vitamins and minerals. Due to their digestive system, baby lemurs don’t feed on old leaves or flowers so as to avoid taking long hours before it’s fully digested. However, they eat only petals on the old flowers but on the new or growing flowers, they tend to eat everything. The also love eating developing leaves. Occasionally, baby lemur will add insects on their menu as well. This happens with the help of the toilet claw, which it uses to dig out insects from tree barks.

Lemurs have their own unique way of communicating. Often times, they use vocalization and at times they will communicate to one another using signs especially between members of the same family. This helps them to stay within their range and when they overlap, it’s easy to tell when they are not with the same family member due to the different communication skills. It’s believed that this happens because they have a brain development that is higher unlike other animals in the wild.

Baby lemur have a social life that is closely similar to that of apes and monkeys. They live in groups of about 15 individuals. Their home range is wide enough to accommodate everyone in the family with the female dominating the nest this is because the male lemurs, love forming their nests overlapping at least two female. The female lemurs share their nests with the young ones although their range may often overlap with other females. Baby lemurs forage strictly at night. In a particular nest, there is a possibility of having at least two females, one male and a young one.

Baby lemurs have their habitat at the rainforests. They are believed to have come from Africa but most of them today are found in Madagascar. Being arboreal animals, baby lemurs spend almost their lifetime on trees. Baby lemurs are very territorial and they use urine scent to mark their home range. Through this, they are able to scare away any other lemur that may tend to overlap within their territory.

Baby lemurs have very short mating seasons, which is influenced by seasonal resources availability in their environment. This short period lasts for only three weeks each year.  All lemurs are good in timing their breeding so that all weaning happens at the same time when there is availability of food in their habitat. The infant survival is directly related to both the health of the mother and the environmental conditions.

As other primate species, lemurs are strictly monogamous and they only have their mating within their home range. However, there are a few who mate outside their range. The gestation period last for about 18-24 weeks. Baby lemurs give birth to several offspring’s.  Afterbirth, mothers would either carry their young ones around or stash them. During transportation, the young ones are either carried on the mouth or cling on the mother’s fur. However, lemurs that live in a community will often share parental guide among all the infants born within the range. Before these infants attain maturity, they are solidly the responsibility of the mother, this includes even the mothers making nests for them and ensuring they are feed. During birth, infants weigh about 30 grams but would grow up to 20 kilograms when they are mature.

There is an estimation that when baby lemurs engage in a fight, most likely, the one with most needs would definitely win the conflict. Therefore, due to this variation, when male and female engage in a supremacy war, the female is likely to win due to the list of demands that is on her shoulders. This is why female often dominate in the groups they leave in even when there are males that are bigger and stronger than they are. Male lemurs in their groups will often submit to the aggression displayed by the female.

Just like other mammals or in this case primates, females are responsible over the development of the young ones until they attain maturity. Hence, this is the reason why they have to share their nests with them to ensure they are safe from all forms of predators especially at night. 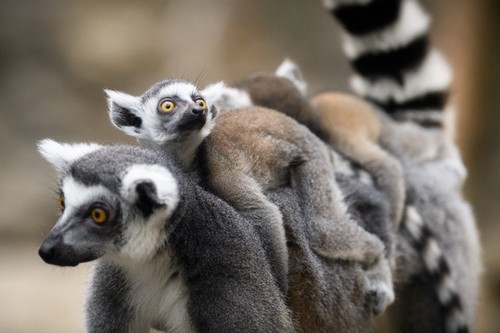 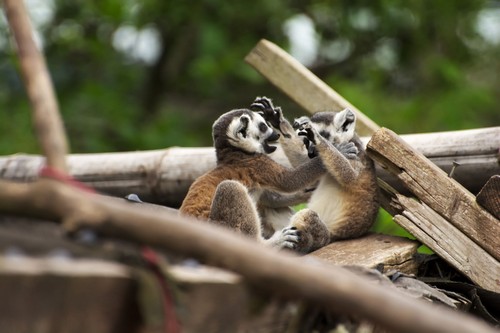 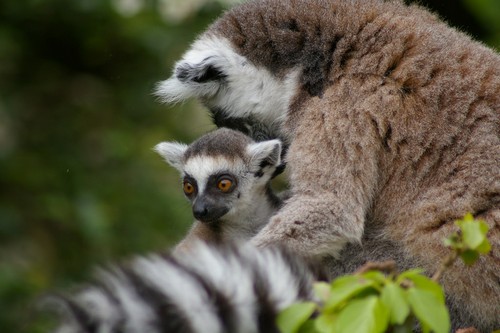 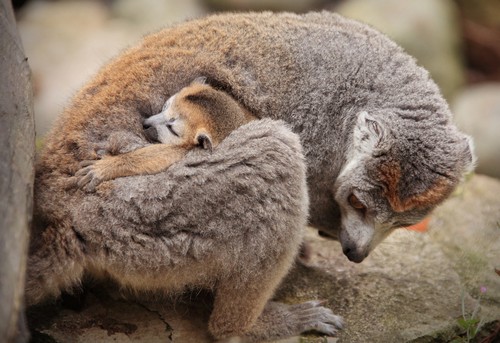 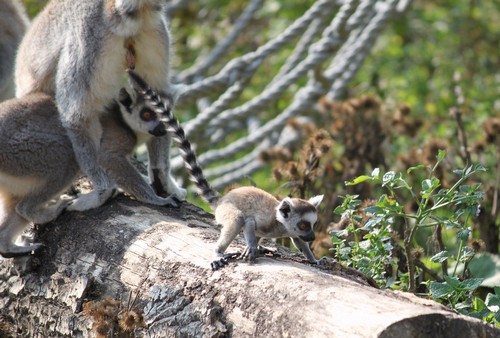 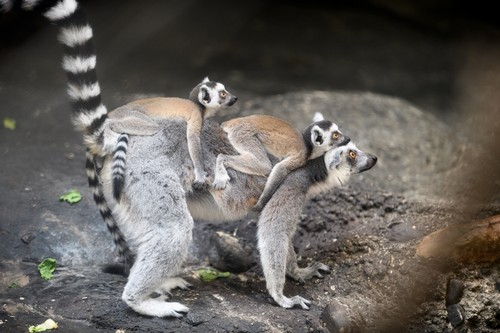 Baby lemur just like other wild animals is considered as an endangered animal. Although it is basically feared by the Malagasy people due to its native haunting looks, the same people endanger it. This is because of the ongoing deforestation process. Human have gone beyond in such of land for farming and therefore, this species becomes the victim of the act.

The main threat and dangers of these species and others is due to loss of habitation. However, there are measures in place that have tried to at least secure their future as well as other animals in the wild. 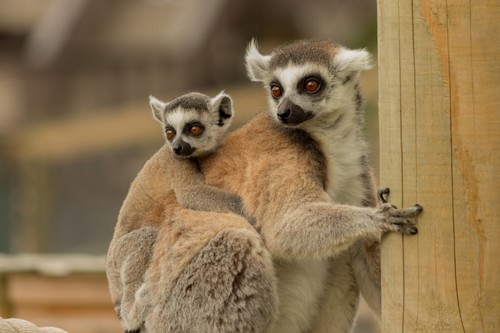 Another threat that faces this precious species from the primate family is the fossa, the predators that often attack them especially when they are on ground. They will attack and take either babies or adult lemurs. The fossa will attack them even when they don’t climb high enough when they are asleep. Human also in this instant are considered as number one predators since apart from taking their habitation, they also hunt lemurs for food. Other predators that lemurs face especially targeting the young ones are the eagles and hawks.