Antelopes are graceful deer-like animals which are classified into the cattle family Bovidae. There are about 91 known species of antelopes, and each species differs from the other in a number of ways, most often in size.
One thing common to all the species of antelopes is that they possess hollow horns, and are very swift animals.
Antelopes are very important in the food chain of their ecosystems, forming prey for a variety of animals. 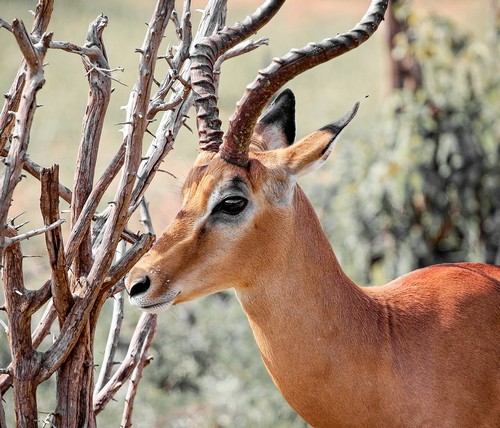 Antelope species are found mostly in Africa, Asia, in the Middle East. The largest number of species are found in Africa, and the species include the eland, reebok, waterbuck, impala, varieties of dwarf antelopes, etc. Most of the species live in savannas and mixed forests, while the smaller species live in tropical forests. Some species are also known to live in mountainous areas and marshlands. A variety of species have also been imported to the United States, where they are kept for sport and hunting. Antelope species often follow the rains and migrate in large numbers, so as to ensure that they have enough food supply to survive the dry seasons.

The different species of antelopes also vary immensely in size. The giant elands of Africa can grow up to 6 feet tall and weigh up to 2000 pounds, which is 300 times the size of a royal antelope, which weighs about 5 pounds and a foot tall.

They possess dense coats with short brown fur, which serves as camouflage. Not all species are brown though, as the gemsbok has gray and black fur, while the duiker possesses dark vertical stripes as well. All the species of antelopes have long powerful legs, which helps them gallop at amazing speeds and strides. Some species, such as the gerenuk, can even stand on their back legs while reaching up for food. 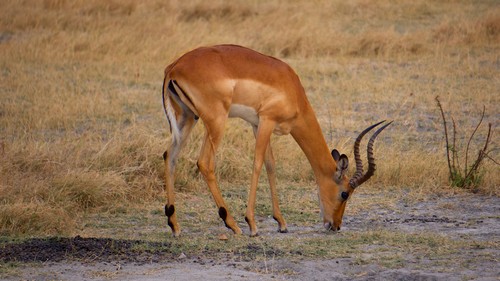 Antelopes have four chambered stomachs, and will regurgitate food and chew it again. This behavior is common to animals classified as ruminants. They do not have upper incisors, instead, they have a hard upper gum pad which presses against their lower incisors to tear of leaves from stems. They also have well developed molars for chewing grass into pulp.

Antelopes are very vigilant animals, due to the number of predators they have. They are always on the lookout for danger even when resting or eating, and have very keen senses to help them. They have eyes on either sides of their head, with horizontally elongated pupils, which helps them have a good view of what is happening behind them, as well as in front. They also possess a great sense of smell, for detecting danger at night when most carnivores are active.

Both male and female antelopes have horns, unlike in deer’s where just the males grow antlers. The horns of female antelopes are smaller and slimmer than that of the males. The horns hollow and curved, and can grow up to 5 feet, and are used to defend themselves against predators, and also to compete for food and females. Species like elands and bongos have spiral horns, while the wildebeest has curved and pointed horns.

All antelopes possess hooves, but the size and shape varies from habitat to habitat. The antelopes which reside in the Northern deserts of Africa have wider hooves, which helps them avoid sinking into the sand, while the antelope species that are found in marshlands have special splayed hooves to avoid slipping as they walk across the mud. 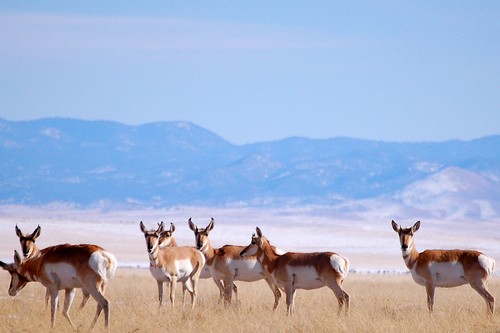 Antelopes are generally herbivores, and a major part of their diet is made up of leaves and plants. However, some duiker species have been observed to kill and eat small insects and birds. Some species have a wide diet, travelling great distances to eat whatever is nutritious and available during the dry season and cold weather. Some species are adapted to eat the tough upper layers of grasses, and leave behind the shorter tender shoots, so it can grow back quickly. Duikers follow flocks of birds and monkeys and eat whatever fruits they leave behind, while the royal antelope will forage the woods at night looking for succulent leaves and fungus to eat off the forest floor.

Antelopes are usually very social animals, and live in large groups known as herds. Because they are often attacked by predators, antelopes have developed various ways to communicate with each other, and to warn themselves of impending danger. They also have various displays which they use to communicate. When an antelope is alarmed, it will bounce up and down on all its legs, keeping them straight. This is known as pronking, and it is believed to be a way to warn others, while also sending a message to the predator that the antelope is fit and not worth wasting energy to pursue. For a Maxwell duiker, when it senses impending danger, it normally freezes, with one leg off the ground, in an attempt not to be noticed. 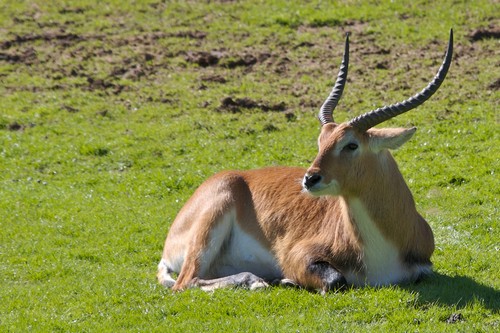 Antelopes are renowned for their incredible jumping abilities. Gazelles and Springboks have a very quick stride and great leap, and even the larger species can jump up to 7 feet, although they are not as fast.

Antelopes have scent glands in their hoofs which they use to communicate, and they often drop scent trails while migrating. If an antelope gets separated from the herd, it could easily follow these scent trails, which could last for days, to find its herd.

Antelopes perform mass migrations to find water sources and food supply during the dry season or winter. They migrate in incredibly large numbers, and this helps keep predators at bay sometimes.

Antelopes, unlike deer’s, do not shed their horns. Their horns are permanent, and are more developed in herds where males have to fight for females. In species which are monogamous, their horns are less developed. The horns are designed in a way that during a fight. They cannot use them to crack each other’s skull, rather they use their foreheads to create impact. 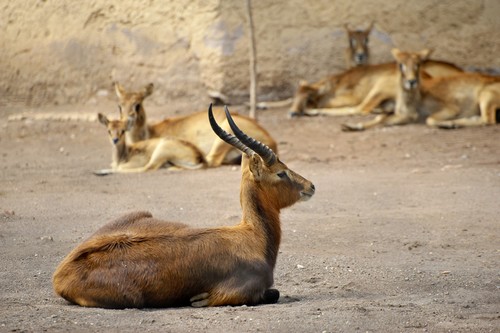 Antelopes develop to reach sexual maturity very quickly. Some of the smaller species of antelopes can be sexually mature at about 6 months, while the larger species take just about 3 to 4 years to be ready to mate. Antelope breeding seasons are often timed to coincide with the rains, when there will be enough food to feed the young. Courtship and reproduction techniques could vary among the species, and while smaller antelopes are monogamous, the larger ones could have two or three females to one male. Courtship often entails competing with other males to gather as many females as possible. Some antelopes will even claim territories with several females in them. In species such as the black buck, males fight each other to control a courtship area known as a lek. The males who come out successful from the fights are able to mate with several females, while the males which have lost are ignored by females.

The gestation period for antelopes varies from five months up to eight months depending on the species. Females normally give birth to a single calf, but in rare occasions they could have twins. The calves are very vulnerable to predators, and are often birthed hidden behind dense bushes. New born calves are dependent on their mothers for milk, and ultimately for survival. In most species, the males take no part in bringing up a calf, but in monogamous species such as klipspringers and duikers, the males will defend a calf from a predator. 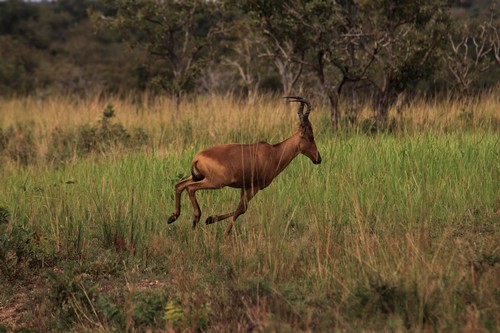 Antelopes are key in the food chain of their habitat, and have variety of predators such as lions, cheetahs, etc.  New born calves are the most hunted, followed by sick, old or injured which cannot escape or fight back. In adult antelopes, males are often killed the most, because they would stand to fight predators when they cannot run, allowing the females and the calves to escape.

Most antelopes have a flight distance, which is the minimum distance they give a predator to give them a chance of outrunning. The flight distance for cheetahs is farther than that of slower lions. The life span of antelopes is quite difficult to estimate, as it is a survival of the fittest, and older slower antelopes are easily killed. 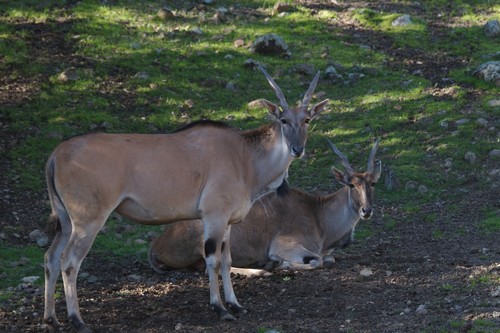 Up to 25 species of antelopes are marked as endangered by the International Union for the Conservation of Nature (IUCN). These species include the mountain Nyala and the Dama Gazelle. These species suffer from habitat loss due to human encroachment, and are killed for sport. The Tibetan antelope is regularly hunted for its pelt, which is used to make shawls, and this has greatly affected their populations in the wild. Saigas are hunted for their horns, used to make aphrodisiac, and are listed as critically endangered. Because horns are found only in the males in Saigas, the number of males in herds are depleted, and there have been reports of herds with up to 600 female Saigas, containing a single male. This ultimately leads to a reduced population growth rate.