Can anyone imagine surviving on only ants and termites for its entire lifetime? Well, as much as disgusting it may sound, there is a creature which finds it deliciously tasty and spends its entire lifespan on it! It is the Anteater.

It has been specifically seen that the anteaters generally populate the areas throughout the entire Southern Hemisphere; but these are more likely to be found in the African, Asian as well as some parts of the Australian subcontinent.

The term anteater has been coined for any large sized mammal whose basic appetite is towards eating any medium to large sized insects. The description as mentioned include the animals such as the Giant Anteater, Silky Anteater, the Collared Anteater as well as the echidna, which is  exclusive to the Australian subcontinent.


It has been researched that the size of an average anteater is approximately about a meter long, but however there are some species which are much larger than the average anteater. This includes the Giant anteater which grows to a massive length of nearly 2 meter. Along with such huge sizes, they are also found in much smaller sizes such as the tiny silky anteater which only grows up to approximately 30 cm.

The giant anteater has been found out to be the biggest terrestrial anteater. Among all the four known species of the anteater family, this giant anteater is the largest and is known to grow up to about six to eight feet long, right from the nose to its tail. The giant anteater also possesses a narrow head, accompanied with a long nose as well as small, round eyes.

According to some leading biologists, the giant anteaters’ behavior have been gifted physically with a strong and sturdy front feet which includes the large claws. These large claws are of paramount importance due to the fact that they help these giant anteaters to dig up holes to search for its food. An important feature regarding these large claws is that these claws stay curled up when the anteaters are strolling around here and there.

In spite of their delicate and tender appearance, these giant anteaters tend to exhibit more than readiness and zeal in order to protect themselves from sudden ambush and attacks from its predators and are generally known to have dominated them and end up exceptionally forceful towards them.

Apart from the self defense tendency, these giant anteaters essentially utilize their strong limbs and long claws to scare off bigger creatures including mountain lions, pumas and even human beings, which are its most regular predator.

Specifically the female anteaters give birth to a singular child after an incubation period of approximately  6-7 months. The young anteaters tend to spend the first 2-3 months in the vicinity of their mum and it has been seen that they develop and become mature to be independent once their mum gets pregnant once more.

Keeping in mind the end goal to stay safe from holding up predators on the ground, these baby ones tend to spend these 2-3 months of the nursing period hanging about their mother’s back.

Is it possible to eat ants all the daylong and nothing else? Well it is! And this is the case with the anteaters. These massive creatures do not have any teeth; but then how can they manage to eat so many ants and termites and still have no major issue! That is when their heavily adapted tongue comes to the rescue.

These giant anteaters have been blessed with a very specialized and adapted tongue which helps them to eat as much as 30,000 ants as well as termites per day. It has been seen that these giant anteaters are tremendously adapted and designed to feed on these ants and termites; not only because they are very easily and readily available, but these critters like the ants as well as the termites are a very reliable and dependable source of food and are not vulnerable to extinction.

The giant anteater has been blessed with a very specialized and adapted tongue. It is not any normal tongue but a very narrow one, with an approximate length of about 2.5 feet and a shape resembling like that of a spaghetti strand.


This tongue of the giant anteaters has a very crucial design which enables it to consume as much as 30,000 ants and termites a day.

The tongue of these giant anteaters has numerous spines which are teeny and rear pointing and are completely dipped under the anteater’s saliva, which is really sticky and helps the anteater to stick all the insects and also aids these creatures in the feeding process.

Apart from their tongue, the another aspect which makes these anteaters very lethal for their prey is their sense of smell which is really accurate. Courtesy of this ability and talent, these anteaters are able to detect the ant mounds from a very considerable distance. 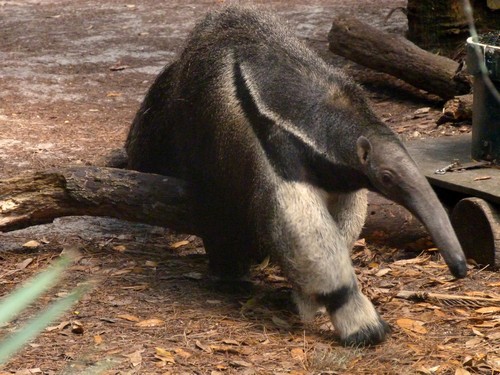 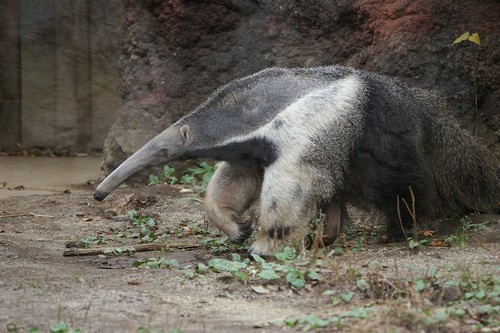 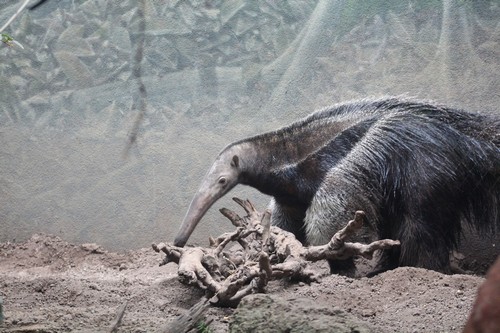 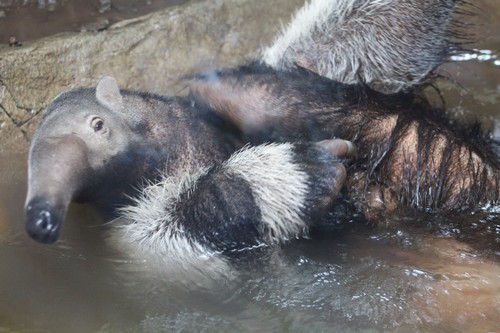 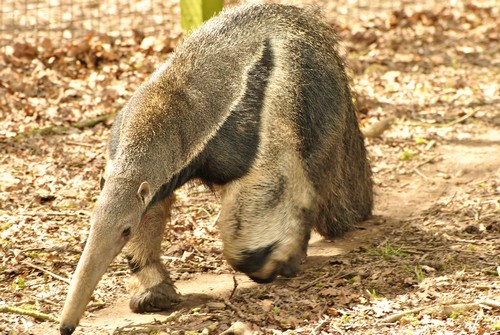 What do Anteaters eat?

These anteaters tend to feed only for about a minute in each mound before going to another mound. They do this in order to prevent the entire population of these ants to wipe out from that particular location and hamper their chances of getting regular food in the future.

When they get these ants in their mount, these anteaters tend to crush them by pressing them against the upper portion of their mouth. After crushing and grinding their food, the stomach of these anteaters come into action. The stomach of these giant anteaters are very muscular and it further helps in pulverizing and digesting the entire food. Apart from the ants and termites, these giant anteaters also feed on small soft grubs as well as the fallen fruits.

These giant anteaters are very unique in the sense that these anteaters have the tendency to mate and reproduce throughout the entire year. Amid romance, a male console an estrous female counterpart, along with following as well as smelling her. 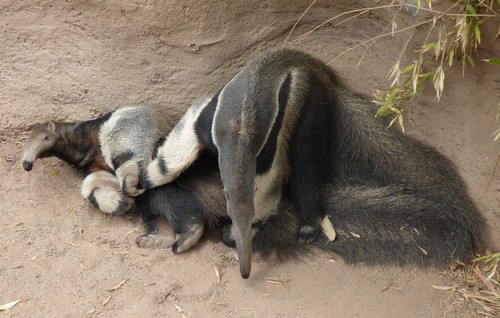 Male and female partners are known to sustain at the same termite mound. During the time of mating, the female generally lies on her back and the male tends to crouch over her. A particular couple generally stays with each other for about 4 days and mate a lot during these 3-4 days.

The incubation period for these giant anteaters lasts for around 200 days which concludes with the birth of a singular baby. The new offspring weighs about 1.5 kilograms and another interesting feature of these female anteaters  is that unlike many other animals of its family, these female anteaters tend to stand upright while giving birth to a new young one.

The anteater pups are born with their eyes entire closed like that of the wombats. These babies tend to open their eyes for the first time after around 6 days from the time of their birth.

During the first few months of this newly born baby, the mother anteater tends to carry its pup on her back in order to protect its baby from predators and other mishaps. At the time of the birth, the pup has the black and white stripe on its back. This is greatly helpful in the sense that this band helps the pup in camouflaging with its mother if any danger arises. 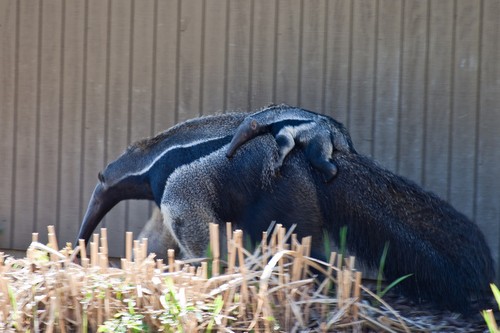 Although the anteaters are not much vocal, still the babies communicate with their mums with a very loud whistle which is very shrill and can be heard from  a very long distances. Following the first three months, the baby anteater starts to eat strong nourishment and food and gets entirely matured by the end of 10 months.

The anteaters are very concerned regarding the looks of their young ones. This is evident from the fact that the mums groom up their babies regularly and this may take up few hours!! This activity of the mother anteater is at its peak during the initial months of the baby and the frequency decreases as the pup becomes more mature to be an adult. The decrease reflects that of the debilitating bond amongst mother and her baby.