If you have watched the anacondas’ movie or any movie featuring the anaconda, you may get intrigued. In the film, much like in real life, the animal is fascinating, beautiful and compelling. In the movies, the animal is depicted as strong, agile, meticulous and cunning. When hunting, it knows how to make fear in its prey its best friend. It knows when to strike, how to strike and where to strike. This maybe the reason you want to find out more facts about the anacondas. You may also want to find out more information about the animal because you love snakes.

In South America, anacondas are feared. They are also considered sacred. In myths about the animals in some parts of South America, anacondas can appear as shape shifters. They also have been thought to appear to man as the god of water. In some cases, they are ruthless man-eaters who hunt and kill humans for sport. Some believe that anacondas are spiritual beings that have healing properties for any illness. There are also stories of the giant anaconda, which is often featured in movies, where the animal grew to 100 feet. Although many people have believed in these stories told in the 20th century, scientists have not verified any of them to be real facts. Here are several facts about this magnificent animal.


Known as the largest and strongest snakes in the world, anacondas are semi-aquatic snakes most commonly found in the tropical South America. Their genus name Eunectes is Greek for good swimmer which reasonably describes this snake’s aquatic skills. There are four categories of the anaconda: the green anaconda, the yellow anaconda also known as the Paraguayan anaconda, the Bolivian or Beni anaconda and the dark-spotted anaconda.

Its physical characteristics make it stand out from other snakes. Unlike other boas, it is stocky, muscular and exceptionally large. Their necks are thick and narrow. The head, however, is a bit wider.  Its nostrils and eyes are located at the top of the head. This structure is perfect for its aquatic life.

When in water, the anaconda’s body is completely submerged except for its nostrils, which are left above water. The nostrils being at the top of its head means it can actually hide from predators and hunt for prey. From there eye to the jaw, anacondas have a thick black stripe that runs through. The skin of the anaconda is smooth and loose allowing it to absorb a large amount of water. They also have small scales on their bodies. These scales are usually smooth and increase in size towards the posterior. Near their cloaca region, anaconda’s scales have spurs.

Like their name, green anacondas are greenish gray, greenish brown or olive in color.  They may have brown or black egg-shaped spots on the back of their bodies. Their sides may at times be more yellow than they are green. Because of their size and their strength, it has been consistently dangerous for people to stretch the animal out to measure its full length. Trying to stretch the animal out is also potentially dangerous for the anaconda.

In the struggle, it may hurt its back and end up dead, which most people agree is not necessary or worth it in the end. For fear, their size is usually estimated. The estimate may be off since the animal is not measured. According to- Rivas, an anaconda enthusiast and scientist who has captured and measured over 1000 anacondas, the green anaconda is the largest in the anaconda species. However, they do not grow beyond 20 feet in size. It is estimated that green anacondas can weigh up to 250kgs.

These are considered to be an in breed of the yellow and the green anacondas. They have a coloring similar to that of the green anacondas and have some features similar to those of the yellow anaconda. For the longest time, they were thought to either belong to the green or yellow anaconda species depending on which characteristics were most common in the snake. However, scientists have found that they belong to their different species.

These anacondas have a yellow-green coloring. They also feature dorsal bands, spots blotches or streaks, which are usually dark brown or black in color. There is a yellow pattern and black scales located on the bottom tail of this anaconda’s tail. This design is as unique to each snake as the fingerprint is to the human beings. The yellow anaconda grows to about 9 feet in length.

These anacondas have a brown skin with black or dark brown spots. They too grow to about 9 feet just like most of the anacondas.

Because they are semi-aquatic, anaconda’s most preferred habitat is in swampy areas. They are most commonly found in tropical rivers, grasslands or rainforests. Where there is humidity, heat and a dense foliage of the rainforest, anacondas will thrive because the temperature is conducive for them to hunt and grow. They enjoy being in slow moving streams and murky rivers. They enjoy sunbathing on trees close to rivers so they can jump into the waters when the need arises.

Other than sunbathing on the branches of trees, anacondas have numerous unique hobbies. During the day, the anaconda is lazy and mostly resting. There are on the full active mode in the evening and at night. Because of their length and weight, it is cumbersome for them to move on the ground. In water, however, they are as fast as the fish. Because their nostrils are on their heads, they can breathe and see while fully submerged in water.

They are territorial animals that enjoy solitude. You will therefore never find a pack of them together unless it is mating season. They adapt to their surrounding with ease. For instance, anacondas that live in grasslands, bury themselves in mud during the dry season. In this season, they are dormant. 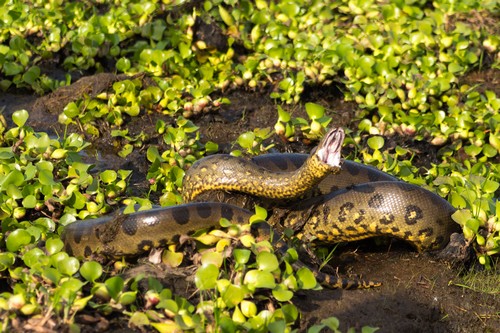 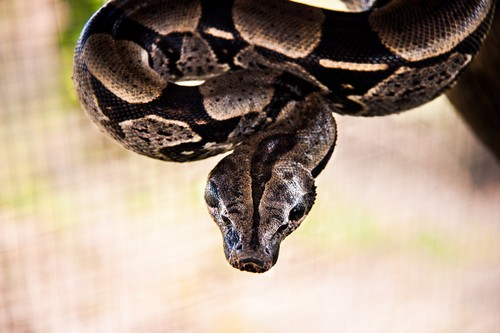 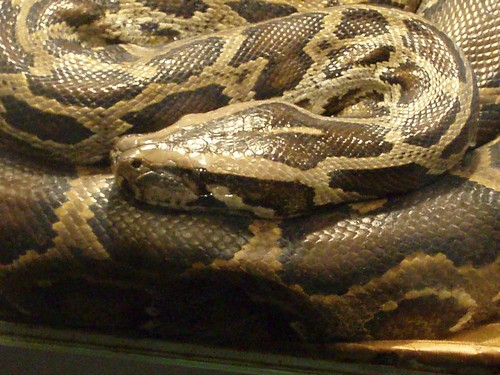 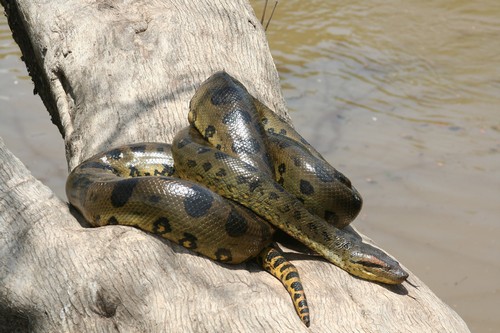 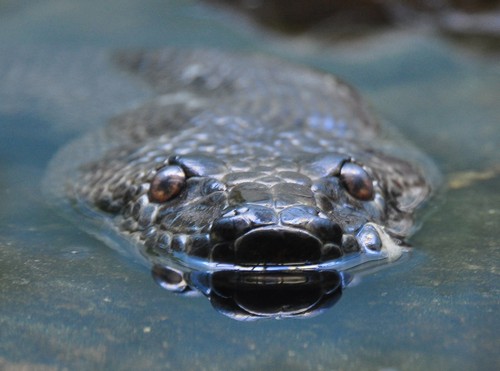 Their diet and eating habits are unique to them. Like all boas, anacondas are not venomous. While this is great newS if you are worried about being bitten, their great strength makes them powerful constrictors. Usually, anacondas will hunt for their prey in the darkness. Before it attacks, it takes its time to study its prey, remove all distractions and ensure there is nowhere to escape to. Their camouflaging color conceals them as they lurk in murky waters.

Once the anaconda gets everything figured out, it will attack its prey restraining it with its powerful curved teeth. Its constrictive technique kills the prey. Its constriction is thought to work in one of two ways, it will squeeze the lungs too tightly for them to work and the other is that it will break all the bones in a prey’s body.

Scientists say that the constriction power is so strong that it restricts blood circulation. The animal ends up dying because blood could not reach the brain. When in water, the anaconda will apply this technique killing its prey by drowning. Once the animal is dead, the anaconda swallows it whole. Their jaw is large and has loose joints that move when there is a large animal to be swallowed. They lack sternum and have stretchy skin that allows them to change shape to accommodate the dinner eaten. 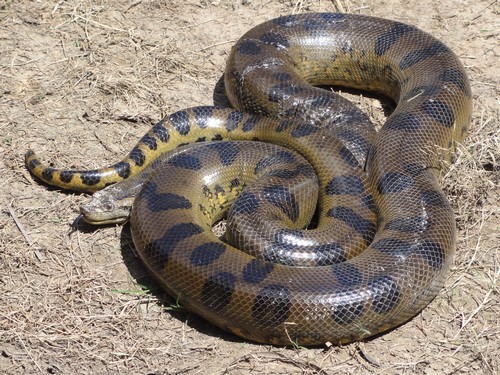 The diet of anacondas mostly includes fish, smaller snakes, small adult snakes, lizards, pigs and other wild animals. In some cases, the female anaconda will eat a male anaconda. Although they are at the top of their food chains, swallowing a large animal such as the jaguar may result in injuries that cause death. After feeding on a large meal, anacondas can go for weeks or months without food.

During the mating season, females release an airborne chemical that attracts the male anacondas. During this time, females do not move. Males, however, will travel long distances to find the female. They get the female’s scent by sticking out their tongue. A large group of males forms the breeding ball where they wrestle for a chance to mate with the female. These balls may last for weeks. Although in this wrestle the strongest may win, the female can also choose who she wants because she is bigger and stronger than the males. 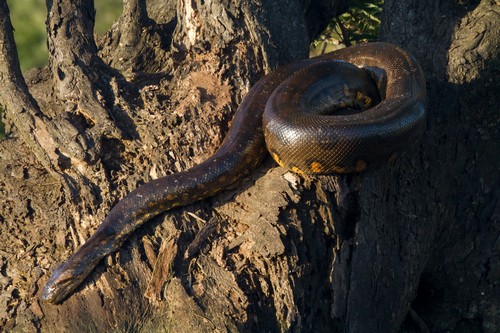 After mating, the female carries the embryos inside her body for seven months and will not eat during this time to avoid injuries. When born, the babies are surrounded by a membrane that they have to break out of. Anacondas are born with survival instincts of their own and are therefore not take care of by their mothers. One female anaconda can have up to 29 babies: The number may be large or smaller depending on the size of the anaconda.