At the mention of alligators I know you are filled with fear.  Most people don’t even know there is a difference between crocodiles and alligators. They classify them as very dangerous animals to human life.  While that can be true, one thing that is important to mention is that alligators do not consider human beings as their prey unless if this human being feeds it on several occasions.  The alligator will then consider him as part of its food and will prey on him.  It is highly forbidden for anyone to feed the alligator.  Alligators, other than being a tourist attraction, have very many other benefits to especially the human beings.  You will discover this as you read on.

The American alligator live in Florida and Louisiana.  They live in freshwater like lakes, ponds, swamps, rivers, marshes and wetlands.  In the wetlands they construct alligator holes.  In so doing they cause many different plants to grow and during the dry season many small animals find a place to live in these holes.  They also live in salty water if the fresh water is not available.  The large alligators live in pair, a female and a male.  They will jealously guard their territory from other alligators.  The smaller alligators stay and live together in a large group.

Depending on their age is the type of food eaten by the alligators.  The young alligators usually  eat crustaceans, fish, snails ,worms and insects.  And as they mature they feed on larger preys  such as larger fish, smaller mammals, birds, deer and other reptiles.  The large alligators feed on dogs, deer, black bears and panthers.  They are regarded as the largest predators.  Alligators do not attack human beings unless when provoked.

An alligator becomes sexually mature when it reaches a length of 6 feet (1.8m).  Like all other animals alligators have a mating ritual. Their courtship is usually under the water. The female prepares a nest made of vegetation.  The decomposition of the vegetation will provide the heat needed for the incubation of the eggs.  During the spring when the weather is warm, the sexually mature male and female start looking for mates.  The way they do it is by producing a bellowing sound.  This is to announce that they are there and looking for mates.  They also send vibrations through the water.  The other thing they usually do is they swing their head up and down.

Alligators are polygamous and a male will mate with several females.  When the male finds a suitable mate they will go on with their courtship.  They move together rubbing and pressing each other’s back and snouts.  The alligators will press their mates and submerge them in water.  The male will continue pressing them inside the water. This behavior stimulates even further courtship.  The female will start mounting the male and this never ending courtship will continue as they submerge each other in water and press each other underneath the water rubbing their head and body together.  Courtship takes a longer period but mating takes less than 30 seconds.

The female goes to her nest which she had earlier on prepared.  She makes the nest into a bowl shape using her back legs.  She then lay 20 to 25 eggs.  She covers these eggs with vegetation and some mud. The eggs take about 65 days to hatch.  The female stays close to the nest during this period of incubation.

Alligator will either sprawl or high walk.  Sprawling is where the alligator moves forward while the belly is touching the ground.  High walk is where the alligator uses its four limbs to walk while the belly is up from the ground. The alligators cannot high walk for a long distance because of its weight.  The alligators have a slow metabolism.  Alligators have a very high speed when it comes to catching a prey.  The smaller preys are caught and with only one single bite are killed and eaten. Alligators will grab larger prey with the same speed, drag it into the water and drown it and then the alligator will tear it into pieces and eat it.  If it is unable to tear its prey into pieces then it will be swallowed wholly, alligator will wait until the prey will be decayed and then it will eat it.

The muscles in the jaw of an alligator are made in such a way that they can bite and grip a prey.  These muscles are very strong but the muscles which are for opening the jaw are relatively weak.  When an alligator is being transported a person can hold its mouth shut alone until it reaches its destination.  One can also use several wraps of tape to keep the mouth shut.

Alligators will walk away when it sees people but this does not mean that it will not defend itself if attacked.  It is always important to keep distance when you encounter an alligator.  It may be hungry and as the saying goes “a hungry man is an angry man,” this can apply to a hungry alligator. 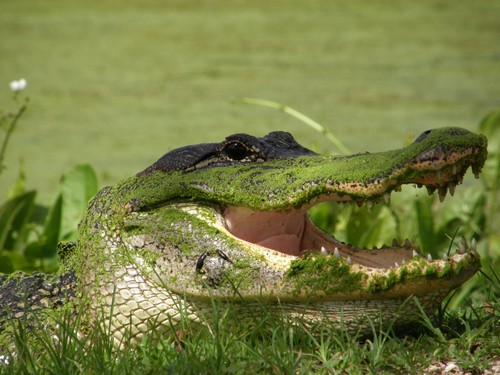 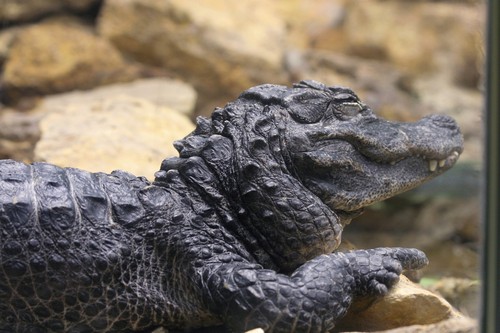 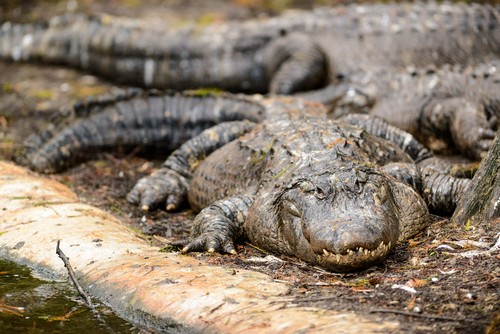 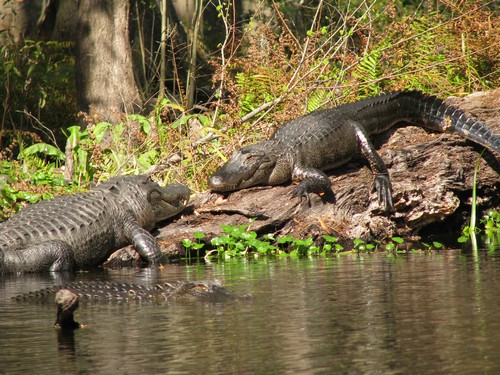 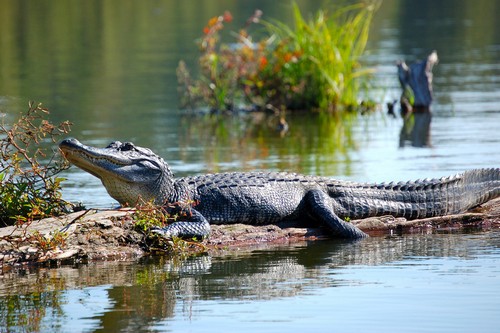 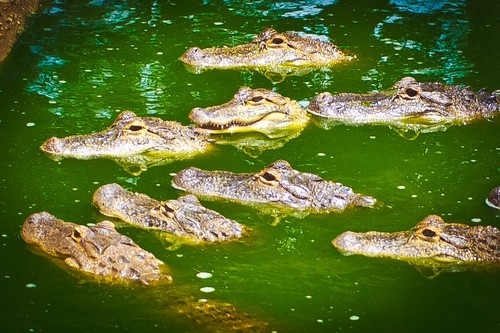 Human beings have been a great threat to alligators.  They have been killing them for meat.  Others have killed them for fear that alligators may attack them, their children or their livestock.  The small alligator are the ones which have been at a great risk.

As the population of human beings increases, there is need for more room for expansion.  Trees are cut down in order to get more space to build homes and infrastructure.  The climate changes as a result of the cutting down of trees and many places become dry as a result of lack of rainfall.  This means that streams, pond and some rivers where the alligators live dry out.  The alligators are reptiles and cannot live on land and because they cannot walk for long distance to the other river, stream or lake then they soon die.

After the governments of the countries where these alligators live, found out that the population of the alligators had gone tremendously down they decided to capture the ones that were still remaining and keep them in captivity.  They also discovered that alligators were not only important to the local people but was important as a tourist attraction.  They got to know that when alligators were in captivity they would fetch a lot of income through tourism and thus boost the economy of the country.  The population of the alligators has gone up. 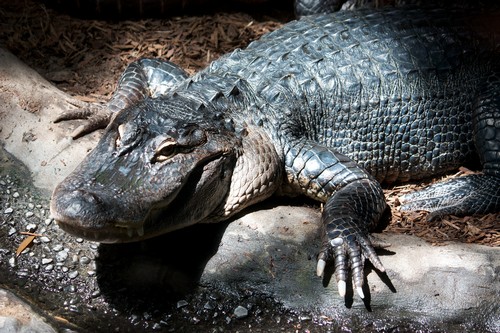 Alligators are very important to the economy of a country.  Many tourists travel far and wide to just come and see alligators.  They pay in the zoo to see these animals and live in good hotels in that country.  By so doing the economy of the country is boosted and the local people get employment.

Alligators are consumed as meat by human beings.